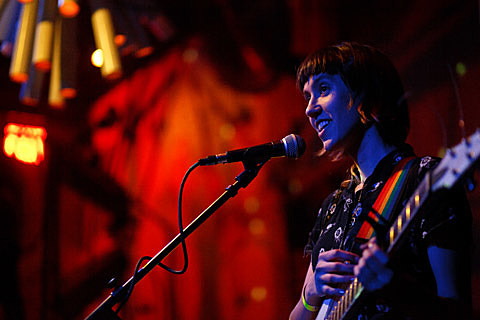 Eskimeaux is the project of Gabrielle Smith of Frankie Cosmos' band and of the Brooklyn-based Epoch Collective (Told Slant, Bellows, Sharpless, etc), whose members frequently play in each other's bands and are known for highly passionate live shows in the local scene. She's now signed to LVL UP's label Double Double Whammy (who also put out the first Frankie Cosmos LP) for her new full length, OK, which will be out this spring.

Eskimeaux just played a hometown show at Palisades with Emperor X on Saturday (1/3), and this week she'll kick off a tour with similarly minded local musician Adult Mom. It begins in Philly and hits Georgia, Ohio and other places before culminating in a New Brunswick show on January 17 and a Brooklyn show on January 18 at Silent Barn with her DDW labelmate Free Cake For Every Creature (who played Silent Barn last night) and Harpoon Forever. That's $7 at the door and Eskimeaux will also be doing a video shoot at the show.

All dates are listed, with a stream of her 2013 demos collection, below...