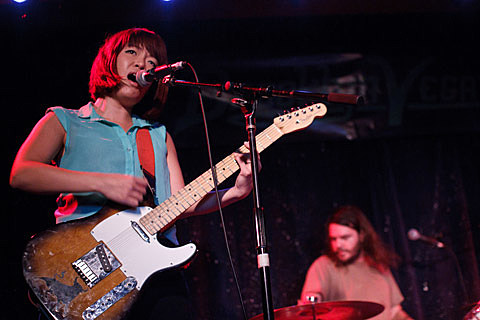 Roanoke, VA's Eternal Summers and Philly's Bleeding Rainbow are old pals, having released a split 7" back in both bands' early days and have toured together more than once. So it's probably no surprise that they put each other's new records on their respective 2012 Top 10 LP lists. As noted in A Place to Bury Strangers' list, the Bleeding Rainbow album, Yeah Right, doesn't actually come out till 2013 (though originally scheduled for October '12) but they've been selling it at their merch table for a month or so. You can check out a recently released single, "Waking Dream," from it below.

You can pick up a copy of Yeah Right, probably, when Bleeding Rainbow and Eternal Summers play Brooklyn Night Bazaar on Saturday (12/15) with Black Dice. The show is free and open to the public. The setup at Night Bazaar is different than last year, with vendors in both of the giant rooms, one with live music, crafts and food, the other with crafts, ping pong tables and more.

Eternal Summers' Correct Behavior is one of my favorite albums of the year and you should definitely check it out if you haven't yet. (It's on Spotify.) Eternal Summers will also open for Nada Surf at Bowery Ballroom on Friday (12/14) and tickets are still available for that show.