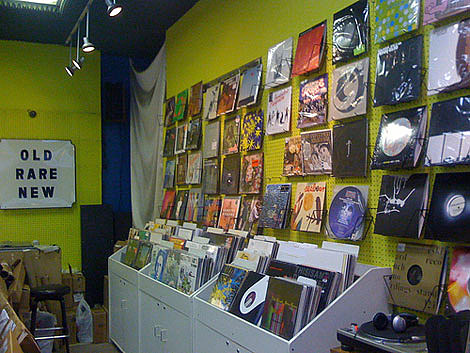 Etherea is was an independent retail record store operating since 1995. We are located at 66 Avenue A, between 4th and 5th Streets.

Etherea as we know it is now closed. Etherea employee Brion still plans on reopening the store (with a new name), but at the moment he and his partner in the new venture are stuck in negotiations with the landlord. Etherea posted this official statement on February 27th:

Many of you have been bewildered by the blogging that has been going on about the closing of Etherea (specifically the Brooklyn Vegan post about Etherea being "saved"). Well, here's the real story. My lease here on Avenue A is ending and I intend to move on from 13.5 years of the music retail biz to pursue a new career. That is still happening, and Etherea is now officially closed, but one of my employees, namely DJ Brion, decided he wanted to buy out my store when I told him I was closing and start his own record shop in same location with a new partner. They have been hard at work trying to hammer out a new lease with the landlord. They plan to re-brand the store, and will have a different slant on music tailored to their tastes and aesthetics. I have been supportive of their efforts, and I hope to report good news very soon...

I spoke to Brion today, and his version of the story is very similar. Though the new record store is no longer as definitive as he made it seem before, he is still very optimistic. Former owner Rich Kim is all for Brion's new venture, and, as stated above, it is now up to the landlord. If they can get a new lease, they will open the new store immediately. Brion said he will "carry on the tradition of ETHEREA", while moving forward "with a personal new idea, featuring tons of in stores and personalized service." He also said, "This is going to happen with the continued positive assistance of multiple parties. The new store will be a split partnership between myself and Jose Luis Pardo of Los Amigos Invisibles."

I sincerely hope that works out for them.

In related news, the Virgin Megastore in Union Square will be gone in May.

And Los Amigos Invisibles are playing Bowery Ballroom on March 6th. Tickets are still on sale. One of their videos below...

Los Amigos Invisibles "Yo No Se"