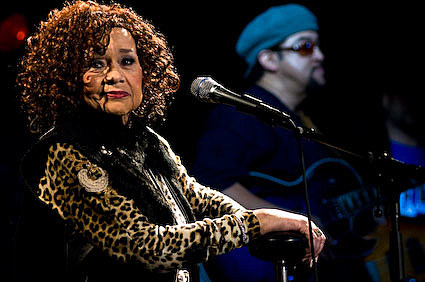 This is not a joke: 71-year-old Etta James actually threatened to beat the crap out of Beyoncé Knowles -- and it's caught all on tape!

The war is all over Etta's song, "At Last " -- Beyoncé sang the tune at Obama's 1st Inauguration Ball on Jan. 20th ... but last week at a concert in Seattle, James was still pissed.

While on stage, Etta told the crowd, "Your President, the one with the big ears ... he had that woman singing my song. She gone get her ass whipped."

She continued, "The great Beyoncé ... I can't stand Beyoncé," according to audio from Crown City Media.

Ironically Etta didn't kick up this sorta fuss when Beyoncé portrayed her in "Cadillac Records." [TMZ]

TMZ later pointed out that the song is not even an Etta James song. She covers it too. The Chicago Sun Times says that "both Beyonce and President and Mrs. Obama were stunned by music legend Etta James' strong verbal whiplashing." Etta James told the Daily News she was just trying to get a laugh and meant no harm. Etta is definitely known for her between song banter at her live shows. Speaking of which...

Etta James returns to B.B. King Blues Club and Grill in NYC for three shows in May. Tickets are on sale.

Etta is also one of many artists who will be Jazz Fest in New Orleans this year...

Etta James also has a show scheduled in Atlantic City. All tour dates below...