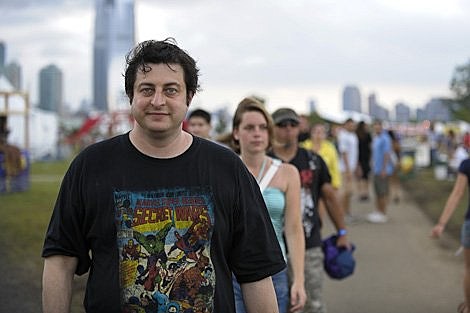 So we've got the Del Close Marathon happening this weekend (8/14-8/16) and we've got the New York Comedy Festival happening in November. And now it is with unbridled enthusiasm that I can achieve a comedy-festival-posting-hat-trick by announcing the EUGENE MIRMAN COMEDY FESTIVAL which is set to take over Brooklyn venues Union Hall and the Bell House from September 17 - September 20. OK, so we briefly mentioned the festival before, but with line-ups, showtimes, as well as venue and ticket info just released, it's time to spread the word.

Curated by the great Eugene Mirman, this year's festival has a gasp worthy line-up that is truly beyond belief and will feature stand-up, panels, videos, special guests, 'theme' shows, the occasional free drink, after-parties, and much more. The highlight of the festival for me are two Daniel Kitson headlining gigs at Union Hall. Daniel is a British Stand-up comedian who I've only had the opportunity to see once, but that one experience was epic. More monologuist than stand-up comedian, he is one of the smartest, funniest, most energetic and eloquent performers I have ever seen. We are blessed to have two chances to see him headline such an intimate room. Besides that, the festival boasts appearances by Reggie Watts, Todd Barry, John Hodgman, Bobby Tisdale, AD Miles, Kristen Schaal, Michael Showalter, Marc Maron, John Mulaney, Jon Benjamin, and many many more. And, of course, Eugene.

The schedule so far is below. According to the folks in charge, even more excitement will be announced in the coming weeks, so stay tuned!! Tickets for all shows go on sale Sunday August 16 Saturday, August 15 at noon via Ticketweb (Bell House, Union Hall).

Full lineup and more below...

9/19, 8:30pm - Bell House * Late Show * - THE COMEDIANS OF LAW AND ORDER
What is this show? Basically, it's comedians who we like who've been on at least one of the 9 different Law and Orders, including Zak Orth, AD Miles and more very special guests.

9/20, 5:30pm - Union Hall - WITTY CARTOONS FOR SNOBS
Top cartoonists from The New Yorker and other crappier publications battle it out in a no-holds-barred cartoon-off with cartoons based on audience suggestions. Plus a surprise musical guest.

Like I said, as the show dates approach, even more awesomeness will be announced. If you want to get warmed up for this marathon of comedy, check out Eugene Mirman, John Oliver, Wyatt Cenac, Ted Alexandro and more at an 826NYC benefit at the Highline Ballroom on September 14.

Eugene, who happens to be a published author has a NEW ALBUM coming out on October 6th via Sub Pop Records entitled God is a Twelve Year Old Boy with Asperger's. It was recorded at the Lakeshore Theater in Chicago late last year and loaded with new material. I can't wait. Here is the tracklist:

God Is a Twelve-Year-Old Boy with Asperger's
1. Hello and Several Jokes on Topics Ranging from Elevators to Goofing Around on a Whale Watch
2. My Gas Got Shut Off--Boo!
3. Vancouver, Detroit, and Bears!
4. Divisive Online Banner Ads
5. America Is Better than Abortion
6. The Questionable Polls of Russia Today
7. I Found an iPod
8. The Will to Whatevs Book Tour and an Amazing Boy with Asperger's
9. Classmates.com
10. Sex, ??? AirLIES, and Videotape: A Three-Part Radio Play Very Based on a True Story
11. My Letter to ??? Airlines, Your Postcard to ??? Airlines