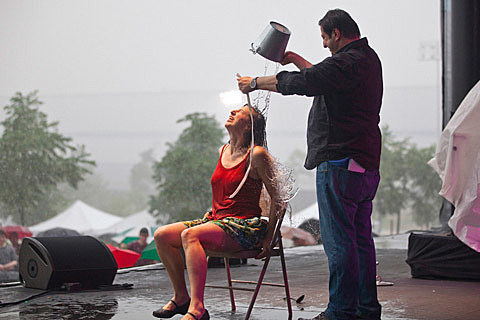 When the Eugene Mirman Comedy Festival reared it's beautiful head for the first time in 2008, the sheer magnitude of the thing was really and truly mind-blowing; 10 epic shows, 4 nights, 2 venues. And for reasons which I can't fully explain because I don't quite understand them myself, I thought the festival would be a one-off thing. The whole thing had a slight whiff of irony, like it was lampooning the very concept of a comedy festival. Then the sucker was back in 2009 with a similar formula; 10 epic shows, 4 nights, 2 venues, and loads of shiver-inducing top-shelf talent. "Huh," I thought, "Maybe this really is something I can look forward to as an annual event." Then, BAM, Fall 2010 comes around and with it The 2010 Eugene Mirman Comedy Festival. That time around, the festival included The Rock Shop as a third venue (note: did you get your 8/27 Ted Leo tix yet?) and featured yet another magnificent roster of talent.

Well folks, it's nearly Fall 2011 and I have some really bad news for the humorless, hummus-eating commenters out there and really GREAT news for everyone else; The Eugene Mirman Comedy Festival is BACK and will take over the Bell House and Union Hall from September 15-18, 2011. And as with previous years, the 2011 Fest is sure to blow the toupee or merkin right off your body. Expect appearances from H. Jon Benjamin, Kristen Schaal, Jon Glaser as Bobby Tisdale, Aisha Tyler, Matt Thompson, Adam Reed, Jessica Walters, Jon Hodgman, Ira Glass and way way way way way more. Brace yourself, the whole schedule with ticket info is below. Check out the coverage and news from past fests to get an idea how truly remarkable they have been.

Hey. If you think I'm done talking about Eugene Mirman, you are so fucking wrong bro. Because there is another important aspect of the Eugene Mirman Comedy Festival that I've mentioned before but absolutely bears repeating; The Eugene Mirman Comedy Festival Kickstarter page. No, Eugene didn't have a DIY venue packed with $40K worth of stuff that he forgot to insure that was subsequently robbed. The Festival costs a lot of money to produce, and the talent and people behind the scenes bust their asses to make it work for little or no money. The purpose of the Kickstarter is to amass a solid kitty (a pool of money, especially one to which a number of people have contributed for a designated purpose) that Festival organizers can use to produce a series of shows that will knock your socks off. Ticket costs can only cover so much. I donated because I am not an idiot who thinks this money is going to line some doofus' pockets; I donated because I know everyone who sees these shows will end up reaping the rewards of our collective generosity. Currently at 81%, The Kickstarter Campaign ends on AUGUST 17th, which is like so soon, so please donate and make this an amazing festival for EVERYONE.

In other Mirman-related news, be advised that there is a Pretty Good Friends 5 Year Anniversary Show happening at The Bell House on Sunday, August 21 at 7:30pm featuring the great David Cross, AD Miles, and more. Tickets are $15 and are currently on sale. Get em while they last. And if you find yourself in riot stricken London at some point between October 5th and October 15th, catch one of many Pretty Good Friends shows happening at the Soho Theater. Tickets are on sale. Don't be a pratt, wanker. Shag baby! Oh, behave! Don't give me that codswallop!