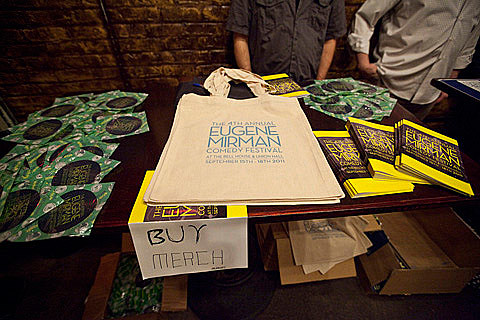 Somehow my subconscious brain knew that the 5th Annual Eugene Mirman Comedy Festival announcement was bloody fuckin nigh. Yesterday I was noodling around flickr looking at pics of Invite Them Up from back in the day. Then last night I had a dream I showed up to the Eugene Mirman Comedy Fest and, while waiting in line, was cut by some d-bags who I then loudly called the C-word only to be publicly reprimanded by Eugene for using such language. He then gave me a 15 foot long nylon tent full of toiletries and candy and I spent the next few REM cycles stressing about how I was going to get all that stuff home.

Flash forward to noon today when I get the formal announcement crammed into my inbox alerting me that the 5th Annual Eugene Mirman Comedy Festival will take place September 13 - 16 2012 at the Bell House and Union Hall. As with the announcements for past EMCF's, details at this stage in the game are scant. (Sarah Silverman on 9/14 is one of the few announced names at this point.) Which is fine with me. The announced shows, below, are the mere skeletal structure of a great, big, fat, tall, and deformed monster of what the Fest will actually evolve into as the show dates get closer. Tickets for all shows are NOW ON SALE!

The schedule as of writing is below, but don't forget! THIS FRIDAY! August 24th, 2012 The Bell House will be hosting Bring Your Checkbook: The Eugene Mirman Comedy Festival Fundraiser hosted by Eugene Mirman and featuring Brendon Small, James Adomian, and many other surprise guests. Per Eugene:

We're doing a show this Friday to raise money for our 5th Annual Eugene Mirman Comedy Festival. You should come. Then you'll 1) see a great show with me, Brendon Small (Home Movies, Metalocolypse), James Adomian (Comedy Band Bang, Craig Ferguson) and surprise guests 2) be able to bid on awesome silent auction prizes like Sarah Silverman doing your outgoing voicemail message, tickets and a meet and greet to Jim Gaffigan's Appolo show, plus 3) a raffle with such prizes as David Cross' mustache clippings in a Potpourri bag made by Amber Tamblyn, dinner with me and festival producers and more!

Schedule, skeletal as it is, for the 2012 Euguene Mirman Comedy Festival is below.

Thursday 9/13 @ Bell House
We Appreciate Ourselves: The Five Year Anniversary Celebration of The Eugene Mirman Comedy Festival
with Eugene Mirman and special guests!
Featuring:
People live tweeting about outfits!
A VIP Herring Room!
Recognizable celebrities walking around avoiding eye contact!
A Slam Poet that you can throw water balloons at!
And probably much, much more!
8:00 PM / 8:30 PM
21+, Tix $20

Saturday 9/15 @ Union Hall
Uh Oh: Dangerous, Inappropriate Comedy For Teenagers
A comedy show for sexually active teens* or families that don't feel too weird if adult subject matter is discussed.
*Teens don't actually have to be sexually active, in fact, it's better if you wait 'til sophomore year of college.
4 PM / 4:30 PM
ALL AGES, $15