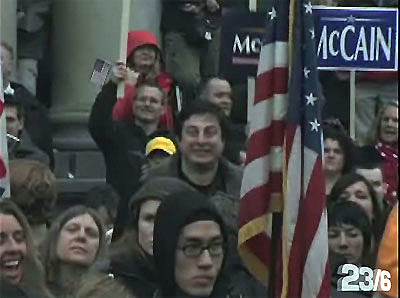 A lot is going on with Eugene Mirman these days & everyone needs to know about it.

Eugene recently headed to New Hampshire to cover the primaries for 236.com. You can see video evidence of his escapades on the 236 website, or at the very end of this post. Appearances by Hillary, Huckabee, Chuck Norris, Romney, townies, and Mirman himself make this a hilarious and unforgettable video.

When you're done watching that, mark your calendars for the airing of Eugene's Comedy Central Presents episode happening on 2/1/08. I was at the taping, and was blown away by how good it was. And definitely keep your eyes on the Comedy Central Presents calendar for other upcoming episodes featuring other awesome (and not very awesome) comedians.

Eugene also has a couple high profile gigs coming up in NYC (including "Get the Laughs and Votes Out for Obama" at Knitting Factory), some in Austin, and some in a few other places. All that below....

And if these events are too rich for your blood, you can always catch Eugene at Invite Them Up which happens Wednesdays at Rififi for $5 (unless he's on tour). Or you can catch him Sundays at Union Hall with Michael Showalter at their ECNY Award nominated show Tearing the Veil of Maya (unless he's on tour). Maya is $7.