Eugene Mirman at his 2012 Comedy Fest (more by David Andrako) 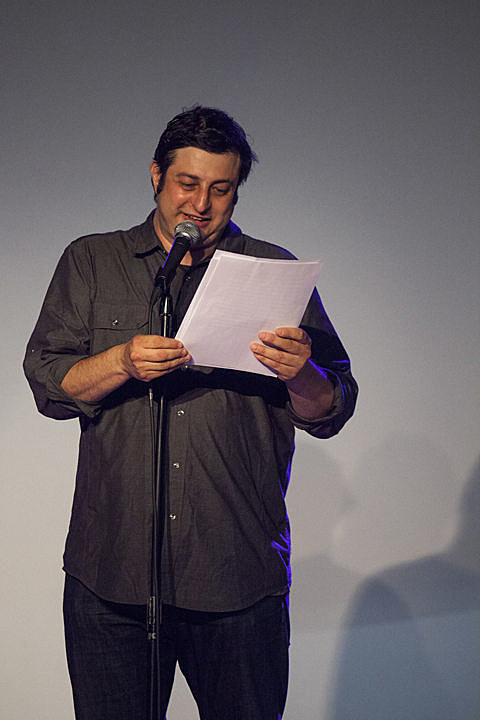 Eugene Mirman, who performed at Fun Fun Fun Fest in Austin earlier this week (11/4), continues to do his 'Pretty Good Friends' show at Union Hall every Sunday, and he'll also be doing one at The Bell House on November 25 to benefit Hurricane Sandy Relief dubbed "A Very Funny 'Fuck You' To Sandy." In addition to Mirman, the lineup for the show includes Jon Glaser, Wyatt Cenac, Mike Birbiglia, Michael Che, and more. Tickets are on sale now and 100% of proceeds will be donated to the Brooklyn Recovery Fund.

In related news, Eugene Mirman's animated FOX show with Kristen Schaal and others, Bob's Burgers, will be returning for a fourth season.

Eugene is also one of the guests at the Comedy for NYWC show at Highline Ballroom on December 2 with Janeane Garofalo and Dave Hill. But as mentioned, Mike Birbligia, who plays the Bell House show with Mirman, is no longer listed on the lineup of that show, but "special guests" still are.

Speaking of Janeane Garofalo, she'll be at Tell Your Friends at Union Hall on Wednesday (11/7) with Liam McEneaney (who hosts an election viewing party at The Bell House tonight), Frank Conniff, Tanya O'Debra, host Victory Varnado, and house band AM to AM.