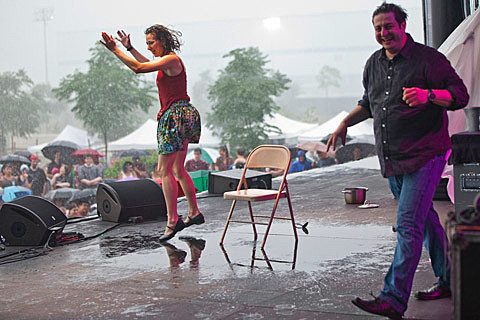 I wish so badly that summer was almost over because this heat is basically killing me softly and enveloping me in depression and heat-related anxiety. By the time I get to work I'm as sweaty as Michael Moore after 8 hours of mowing lawns and people are all "Are you ok?" because they think I'm dying right before their eyes. Sadly, the reality that summer has hardly begun was made apparent when I realized that the concerts at Williamsburg Park kick off TONIGHT with the Outlaw Roadshow featuring Counting Crows, We Are Augustines, Field Report, and Kasey Anderson & the Honkies. Outlaw?! The fuck?! Yeah. Sure. Whatever, millionaires. Nothing says 'outlaw' like having a record that went 7× Platinum in both Canada and the United States.

I digress. What REALLY has me cranked is that Pretty Good Friends take their show from the tiny basement of Union Hall and return to the Waterfront again this year for a show on Thursday July 19th. This year's line-up is epic! Eugene Mirman will be joined by friends Kristen Schaal, Kurt Braunohler, the legendary Bobcat Goldthwait, music by OK Go and many surprises! (And hopefully no torrential downpours like last year.) For me, the main event is Bobcat. Over the past several years he has evolved from type-cast goofball character actor to acclaimed director, writer, and comedian. This is a rare treat for NYC and THE SHOW IS TOTALLY FREE! More Kurt Braunohler dates below...

I was out of town on Wednesday July 11th working on my tan and looking super hot and shiny on a beach which means I sadly missed BOB ODENKIRK and UCB PALS: A LOAD OF HOOEY! at the UCB Theater, Chelsea. This is a major heartbreaker for yours truly as Bob happens to be one of my idols, and seeing him perform in the flesh in NYC is beyond rare. Like, never happens. What makes it more painful was that his "pals" included the much loved/hated David Cross, Bob's partner in crime for many many years. I was gnashing my teeth at the idea that I missed a once in a life time reunion, but David quelled my anxiety with the following words on his facebook page.

Also, get your socks psyched for Bob and I to put something together for a low-key mini-tour of grandiose fucking around. We've been doing things with each other (not in a Penn State way) and they have been really fun and very well-recieved. I just jumped on a show he did at UCB here in NY last week. Super fun. So we'll be doing more of that hopefully late fall/early winter. Again, something very low-key, not a big production and in smaller theaters. Like 500 seaters, something like that. Keep it intimate.

Commence the high-fiving everyone! In the meantime, David will be hitting the road for a handful of dates. He's also gettin hitched; sorry ladies. And gentlemen. Anyhow, check out his scheduled, ok-to-publish publicized appearances below. With any luck, he'll be working out his material in small rooms all over NYC in the days leading up to these shows!

The Gramercy Theater on 23rd street is no stranger to awesome comedy events, and if I'm to believe what I read in my inbox the pattern continues. On Sunday August 19th, Klaus favorite Doug Benson will take over the Gramercy Theater for a whopping TWO SHOWS! First, The Benson Interruption Live Podcast will tear the roof off the place at 4:20PM. I LOVE THE INTERRUPTION. The premise is simple; Doug has his favorite comedy friends do stand-up while he sits there and derails their entire set. The results are some of the funniest shit I've ever seen. Once the place cools down and clears out, the doors will re-open at 7:00pm for Doug Loves Movies. This is a KILLER day of comedy in one spacious, air conditioned venue. If you're like me you're gonna want to go ahead and pick up the Official Doug Benson Combo Pass and make seeing both shows a total cinch.

And speaking of comedy at the Gramercy, Klaus favorite Pete Holmes just announced a show there on Friday December 21st. Tickets go on sale Friday July 20th at noon! Check out this website for more upcoming show info.

Oh and speaking of the Gramercy Theater and Klaus favorites, Klaus SUPER FAVORITE Todd Barry recently recorded a live album at the Gramercy Theater. Titled "Super Crazy," you can watch the performance on Comedy Central Saturday July 21st at 11pm. If you don't have a DVR, Comedy Central, friends with Comedy Central, or have other reasons why you can't see the special on the TV which are none of my business, Comedy Central Home Entertainment will release the "Todd Barry: Super Crazy" extended and uncensored DVD and Comedy Central Records will release the extended and uncensored CD and Digital Album on July 24. The CD fairy left a copy in my mailbox and, lemme tell you, it is fucking hilarious. Classic Todd.

Tour dates for Kurt Braunohler, David Cross, and Todd Barry are listed below.