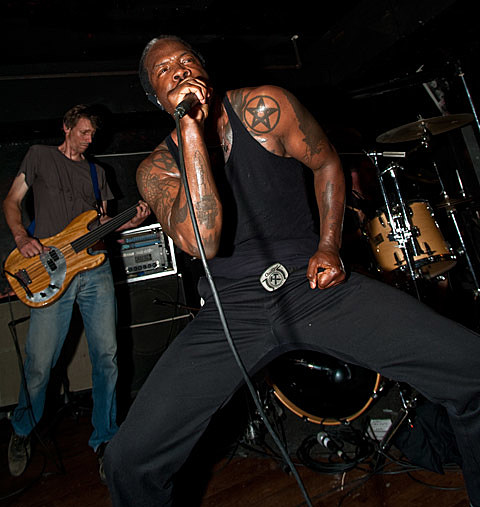 Scott Kelly (Neurosis) is currently touring the West Coast, but will make his way East for a string of dates with the great Eugene Robinson (Oxbow) that will include a stop at Knitting Factory on March 4th. Tickets go on sale at 10AM on 12/10 (Saturday).

In related news, Relapse Records will reissue Neurosis' classic Souls At Zero and Enemy Of The Sun LPs on 180 2LP sets (color and black). Pre-order yours.

Speaking of the amazing Eugene Robinson, his band Oxbow will be the subject of a new crowd-sourced documentary (they have met their goal, but donations close 12/16 if you still want to give). In addition, we asked Eugene Robinson to discuss some of his favorite things in 2011. His response? Top 10 Revenge Themes for 2011. Check his unmissable list, the kickstarter video and all tour dates below (look for additional lists from some of our other favorite artists in the days to come)...

10] If you are a "ladder puller" [those that deny others routes of egress that you, yourself availed yourself of, while convincing those of us without ladders that you got to where you are by dint of your "skill" and "talent"], be on alert: 2011 has just been a dress rehearsal for what I have in store for you withholding pieces of shit in 2012.

9] in very real and concrete terms, I am not having sex with the love of your life to get back at you for what you have done but for what I EXPECT you to do. Have done. Um, whatever.

8] calling me a "whack job" and/or a "douchebag" just makes me laugh. So I will have to find another reason to get back at you.

7] the best revenge is often...revenge.

6] if you have more money than me or are more successful than I am, know this: losing your teeth is just one wise crack away. No one thinks their lack of cash is in the slightest bit amusing.

5] you flaunt nice shit? You will lose your nice shit.

4] calling me "man" if you do not know me in order to conspicuously display some sort of race "fluency" and comfortability with Negroes just makes me want to go all Negro on you.

3] ideas stolen from me, even if they just remain ideas, unspoken to anyone else, will be met with aggressive shows of force. [Witness: Metallica working with Lou Reed. except in this case we had this plan MONTHS before. But they were just pulling a page from when they used Marianne Faithfull after hearing Oxbow had done so and NOT giving us credit for it.]

1] that money you owe me WILL be paid. Or YOU will be paid. In the only currency currently accepted in Bulletonia: bullets.