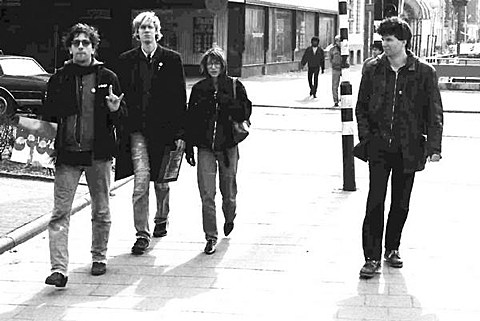 NYC's EULA put out their new Martin Bisi-produced album, Wool Sucking, this week. We previously posted the single "Noose," which was pretty indebted to Sonic Youth-y noise rock, but the album touches on a few other styles too. There's the grungy indie rock of "I Collapse," the lounge-y "Little Hearts," the shouty dance-punk of "Orderly," the dream pop-ish "Monument" and still more. You can listen to the whole thing below.

EULA celebrate the new album with a release show in their hometown tonight (3/5) at Palisades, and the whole lineup is pretty great. It includes No Bra (to quote Bill, "imagine The Fall and LCD Soundsystem condensed into one [topless] German singer"), masked avant-pop guy Gull, and Martin Bisi performing with an impressive cast of collaborators.

The Sonic Youth/Swans producer will be joined by a former member of each of those bands, Algis Kizys (bass in Swans from Holy Money through Soundtracks for the Blind) and Bob Bert (drums in Sonic Youth from Confusion Is Sex through Bad Moon Rising), plus Ian Campbell of newer goth band Pop. 1280. It's the same lineup he did last year at the afterparty for the premiere of the BC Studio documentary, Sound & Chaos. Their set will also include visuals by Preston Spurlock and live painting by Davey Dave Ampersand. Admission is $7 at the door.

Martin has a few other dates coming up too, including another Brooklyn show this month at The Rock Shop (3/24) and a screening of the BC Studio documentary at Lincoln Center on June 25. All dates are listed, with the trailer for that doc and the EULA LP stream, below...