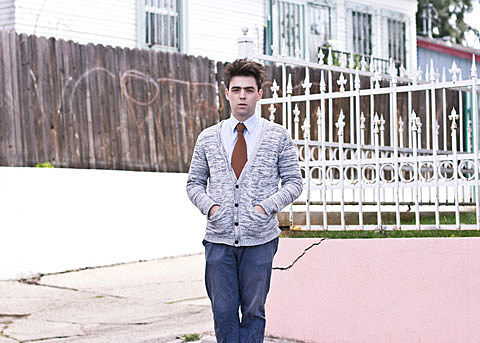 Evan Voytas has one more date in his sights, March 11th at The Echoplex in his native Los Angeles, before he heads to Austin for SXSW 2011. He'll play a few parties while down there, including the previously discussed official BrooklynVegan showcase on March 16th at Swan Dive with Sharon Van Etten, Ted Leo, Lady Lamb The Beekeeper (who recently played The Studio at Webster Hall), Sam Amidon, and Olof Arnolds. A sampler of songs from that showcase (with everyone but Ted) is streaming below.

Following SXSW, Voytas will hit the road in Europe in May and June, though concrete dates are still TBD.

Evan Voytas's Tomorrow Night We'll Go Anywhere EP is also streaming below in full. You might remember the title track from its now popular Kate Moss video. That's down there too. The song has since been remixed by Snoretex (aka Sam Willis, one of half of WALLS) who put a dubstep & trancey spin on the disco number. We're debuting that remix in this post. Grab the MP3 above. All dates and streams and videos and stuff below...