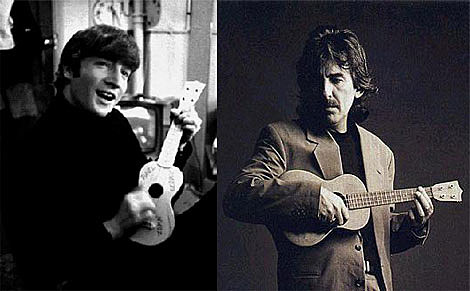 Ukulele aficionados Roger Greenawalt and David Barratt couldn't be more serious about their ambitious marathon-like Beatles festival: two days, performing the entire Beatles catalog - 185 songs - with over 60 singers, 40 musicians and 16 Yoko Ono impersonators. Greenawalt - who is a music producer by day - will sit in with each artist providing the required ukulele accompaniment.

The 2nd Annual Beatles Complete on Ukulele Festival will take place Saturday December 5th and Sunday December 6th from 2PM to 10PM at N8 - 213 North 8th Street (Between Driggs and Roebling) in Williamsburg. A portion of the proceeds will be donated to Yoko Ono.

"We initially thought our vision was a two or three hour Beatles tribute concert featuring the ukulele," said Greenawalt, "but over time it morphed into something much more ambitious. We had heard of albums being reproduced, but an artist's entire catalogue? Now there's something truly epic."

This year's financial beneficiary is Yoko Ono. Last year's event generated literally hundreds of dollars and was donated to Warren Buffett, the second wealthiest man in the world. Buffett - a passionate ukulele player himself - forwarded the proceeds to Girls Inc. of Omaha to provide the girls club with ukuleles and lessons.

In addition to the Beatles Complete Festival, Greenawalt and Barratt are nine-months into an ongoing 185-week project (one for every Beatle's song), where a different artist will cover a new song each week. In addition, essays accompany each new release, covering the song's history and other relevant Beatles facts. The project kicked off on January 20, 2009 and is set to conclude on July 31, 2012.

The schedule for the fest is still coming together, and includes Adam Green doing "I Will" via Videolink and the inevitable ukulele puns like Sonic Uke.

Posted below there's a short film documenting last year's benefit (with Warren Buffett receiving a brown paper bag of all the proceeds)...

FOR THE BENEFIT OF MR BUFFETT

Filed Under: Adam Green, The Beatles, ukulele
Categories: Music News
Comments
Leave A Comment
Elvis Costello covers “Here, There and Everywhere” and names his favorite Paul McCartney song
Paul McCartney got back to NJ with Bruce Springsteen, virtual John Lennon, Bon Jovi & more
35 New Songs Out Today
What’s Going on Saturday?
With ‘Help!’ and ‘Summer Days,’ The Beatles & The Beach Boys were on the cusp of their masterpieces
This week on Ch 66: talking Beatles with Rob Sheffield + musical guests Teenage Halloween