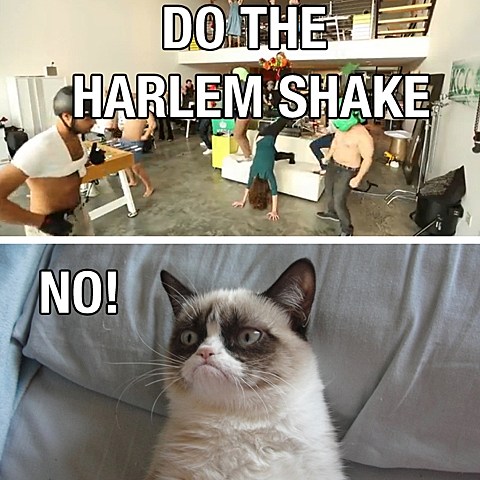 Back in May 2012, Brooklyn producer Baauer (aka 23-year old Harry Rodrigues) released the single "Harlem Shake" on Mad Decent imprint Jeffree's. It was a solid single and one of the more memorable dance tracks of 2012, but I don't think any of us had any idea that almost a year later, it would become one of the biggest memes on the internet. If you haven't seen it yet (aka if you haven't been on a computer in two weeks), it's a video meme that's been blowing up YouTube (something like, oh you know, 4,000 videos uploaded in a day reaching over 40 million total views) that lasts about 30 seconds and features one person dancing in a crowded room to "Harlem Shake" and then once the bass drops, the whole room joins in. The "Harlem Shake dance" that they do isn't the "Harlem Shake" that the hip hop community knows dates back 30 years, but pretty much just a bunch of people going crazy. And it's been done by everyone from Matt & Kim to The Daily Show to The Today Show. Videos of those three are below, if you wanna see more, try YouTube.

So how did any of this happen anyway? Well FADER has laid out a comprehensive history of the meme, discussing the meme, its inventor, 19-year old film hobbyist Filthy Frank, Baauer, the real "Harlem Shake" dance, how Baauer actually feels about it, and if he's making any money from it.

And the memes are leading to other uses of the song too. Azealia Banks, who was supposed to release her debut full length this week but didn't, decided to record herself rapping over the beat, but Baauer's since had the track removed. Azealia questioned him on Twitter, "@baauer why you coccblockin tho??? Lmaoooooo" to which Baauer simply responded "cause its not ur song lol." Azealia then backfired "you're a pussy. You don't belong in hip hop" and Baauer has yet to respond, but Azealia's old pal Perez Hilton stepped in, causing Azealia to call him a "faggot" again. Perez then tweeted "Ugh. There you go again with the F word. Showing your true colors. You are so parched."

As mentioned, Baauer is on tour with veteran producer Just Blaze (and collaborating with him too) and that tour comes to NYC TONIGHT (2/15) for a show at Webster Hall. Once Baauer's fame picked up, tickets started going fast for that one and now it's sold out, but you might still be able to get VIP tickets.

Visit NBCNews.com for breaking news, world news, and news about the economy