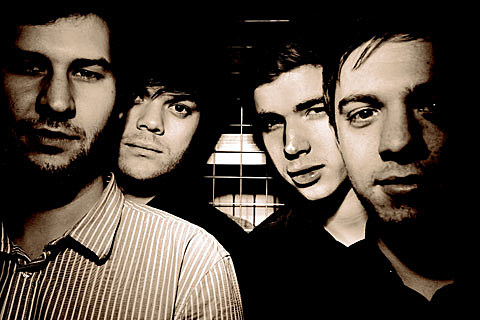 How to describe their sound? Their name kind of says it all -- as in "...and the kitchen sink." Their 2009 single "My Kz Ur Bf" really exemplifies that, and is kind of like a collision between ABC and Muse... and I mean that in a good way. Their new single, "Schoolin'" (downloadable above) still kind of sounds like that, but with a hook that might make some think of a PC Richards commercial. There's a whole lot of seemingly disparate elements going on in any one song. Sometimes it works, sometimes less so.

The band's debut album, Man Alive, came out over the summer (in the UK, no American label yet) to somewhat polarizing reviews in the press, that tended to fall on which side of the Atlantic they were from. For example, the NME gave it 8/10, saying:

Thanks to the slackers, there are three dirty words in indie right now: ambition, intellect and effort. Everything Everything don't just fit those terms, they pole-vault over them. It probably goes some way to explaining why, over the past nine months, they've not become the chart-bothering megastars they deserve to be.

On the other end of the scale is Pitchfork, which gave the album a 3.8:

But stuffing everything humanly possible into your songs can be overwhelming, if not identity-sapping. The first 10 or so seconds of this record is pretty much the only span with any negative space-- and even that resembles the obelisk-staring intro of Coldplay's "Square One". From there on, Man Alive is jacked up with bizarre key changes, superfluous time-signature switches, electro noodling, and half-rap lyrics delivered in run-on melodies, and you ultimately think, "hey, what would happen if Dismemberment Plan got a crash course in Pro Tools and a record deal with Fueled By Ramen?" Everything Everything aren't afraid to answer those tough questions...credit Everything Everything for finding their own niche, but it's one that's been unoccupied for good reason.

I caught them at SXSW this year and thought they were pretty good. That they can even pull off these crazy songs live is an achievement in itself.

Everything Everything - My Kz Ur Bf on Later w/ Jools Holland