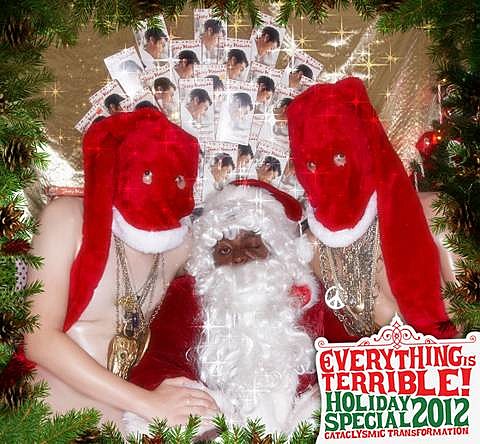 It's that time of year again, judging by the posts on this site today, with lots of Holiday-themed shows coming up. Unsurprisingly, The Bell House lives for this kind of yuletide cheer and has about a dozen or so holiday shows lined up in the next month. Here's a rundown.

First is the Everything's Terrible! Holiday Special 2012 which happens December 12 (tickets). If you think the Star Wars Holiday Special is the worst Christmas-related thing television has ever birthed, the Everything's Terrible folks will likely prove you wrong. For an early taste, there's a trailer for the crap extravanga below, along with a list of all dates for this ironic roadshow which is touring both coasts at the same time.

On the next night (12/13) it's The Party Machine's 2nd Annual Holiday Benefit Blowout with hosts Arden Myrin and Lisa Delarios with guests Jon Glaser, Chris Gethard, Sheng Wang, Janeane Garofalo and Adira Amram & the Experience with proceeds going to Badass Brooklyn Animal Rescue and Red Cross Disaster Relief for victims of Hurricane Sandy. Tickets are $12 and still available but probably not for long -- don't delay.

And for ska fans there's The Slackers Christmas Celebration on 12/22 which also celebrates the band's 20th anniversary. The show also features The Frightnrs, Sammy K, and Caz & the Day Laborers. Tickets are still available.

Wait there's still more holiday fun at The Bell House: for burlesque fans there's Doc Wasabassco's Birthday Celebration And All-Holiday Party on 12/14 (tickets); for the wizards and muggles out there, you can celebrate at The Harry Potter Yule Ball 2012 on 12/15 with Harry And The Potters, Potter Puppet Pals, The Whomping Willows, and The Home Alones (tickets); later that night (12/15) it's The Rub's Holiday party with Eleven & Ayres and special guests Kon & 7L' and for those who need some twang in their stocking, on December 16 it's The Suzi Shelton Band's Fourth Annual Rockin' Holiday Party with Amelia Robinson From Mil's Trills (tickets).

Everything Is Terrible trailer and flyer for the Snowball Ball are below.

EVERYTHING IS TERRIBLE! HOLIDAY SPECIAL! 2012! TRAILER! from Everything Is Terrible! on Vimeo.