Evidence of Dilated Peoples. One of the illest rollercoaster MCs of all time 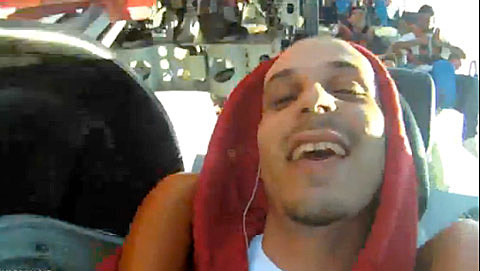 Evidence is prepping his second solo disc away from Dilated Peoples. Cats & Dogs will be released via Rhymesayers on 9/27. The LP will see him team with names like Slug of Atmosphere, Raekwon, Aloe Blacc (who plays NYC soon), Prodigy, Aesop Rock, Roc Marciano, and others, and features "To Be Continued..." which appears in (awesome) video form below. That's a still of it above, shot almost entirely DIY on a rollercoaster. Evidence will also hit the road for a string of US dates, hitting Rock The Bells in NYC on September 3rd. Tickets are still available. All dates are below.

Check out a new Roc Marciano track with Oh No (aka Gangrene) and Alchemist called "Jet Luggage" below. Roc Marciano will also appear at Rock The Bells 2011.

After many long years in label limbo, it was starting to seem like Saigon would be best known as "that rapper from Entourage". The MC's long-shelved LP The Greatest Story Never Told was a step away from being a fairy tale with the almost incredulous guests and producers reportedly making appearances. After four years of anticipation and frankly almost as much doubt that the project would ever come out, The Greatest Story Never Told FINALLY dropped earlier this year with appearances from Jay-Z, Q-Tip, Lee Fields & The Expressions, Bun B and others, and production from Just Blaze, Kanye West, or Buckwild on virtually every track. FreeOnSmash will release his follow-up this month, War Music. Stream a track from that below.

Catch Saigon on August 5th at Knitting Factory in Brooklyn, tickets are on sale.

Knitting Factory will also host Slum Village on July 21st. Tickets are on sale. Slum Village are down to one original member, T3, who released the 3ILLER EP yesterday (7/5). Stream a sampler from that EP below.

D12 is scheduled to play BB King's on July 19th, and though the bio/and picture shows the contrary, I am guessing that Proof won't be on hand for the show. No word on if Eminem will make an appearance either. Tickets are on sale for the show which includes appearances fron King Gordy and Lethillweapon.

Pharoahe Monch has multiple appearances coming up over the next week. He was recently spotted backstage at Best Buy Theater's Salute to Hip Hop. Pictures from that HERE.

All streams/videos and Evidence tour dates are below. While you're there, check out a video of Michael Rapaport and Peanut Butter Wolf shopping at Amoeba.

Saigon - "Married To The Game"