High on Fire at Webster Hall (more by Greg Cristman) 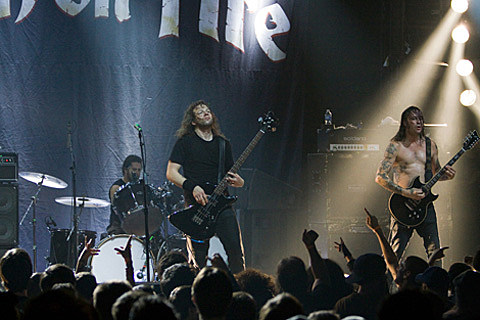 High on Fire have announced De Vermis Mysteriis, the band's new album due on EOne Records on April 3rd. The LP, produced by Kurt Ballou, features 10 tracks and draws inspiration from "a fictional grimoire created by Psycho author Robert Bloch and incorporated by H. P. Lovecraft into the lore of the Cthulhu Mythos." Head below for all tour dates and details on the release.

Don't forget that High on Fire will join Trash Talk and a mammoth cast of others for the BV/Power of The Riff show during the Converse/Thrasher Deathmatch at Scoot Inn on March 16th in Austin. All High on Fire dates are below.

Another band scheduled to play the day party, Ceremony, have posted a new track from their forthcoming Zoo. Check out "Adult", downloadable below as well as a a video for "World Blue" below. All Ceremony dates are below.

The Melvins have announced TWO new releases, including the The Bulls & The Bees EP due on March 13th via Scion A/V and the forthcoming LP Freak Puke due via Ipecac on June 5th. Those expecting a four-piece will be surprised to know that the Freak Puke LP will be from "Melvins Lite", aka Buzzo, Dale and bassist Trevor Dunn. Fans of the four piece shouldn't fret, Jared and Coady will be on the road with Unsane this April.

Arabrot, who were one of the most impressive bands at byLarm this past week in Oslo (pics/review coming) have released a video for their title track to Solaranus. Check that out below, along with a stream of another Norwegian band that I enjoyed, Dark Times.

More suggested NYC shows, streams, a new Rise & Fall video and a full live set by Bolt Thrower from 1989 is below.