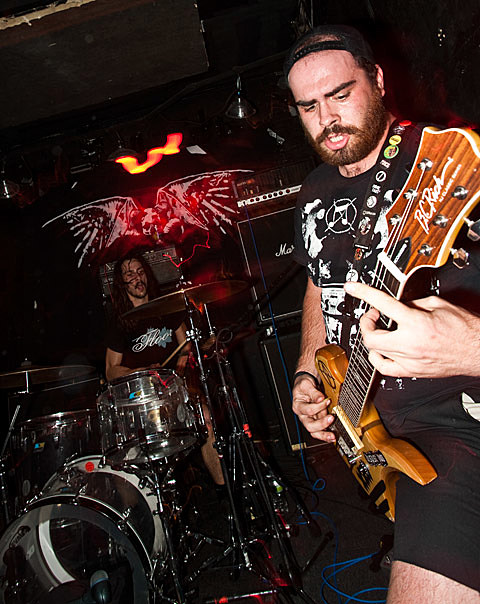 Coke Bust will return to NYC with Tenement, D.O.C. and Rational Animals to play Acheron on 1/4. The show is one of a few dates for the fast-hardcore crew. Chris of Coke Bust/Magrudergrind will also be playing drums with D.O.C. when they play Saturday (12/17) at Death By Audio with Triac, Backslider (who are streaming a new track), and Psychic Limb as part of Defeatist's farewell show. Defeatist's Tyranny of Decay was one of my favorite records of 2011, and the Coke Bust show at Acheron was also one of my favorites of the year.

Weekend Nachos have added a gang of dates with Homewrecker leading up to their appearance at A389 Anniversary. Those dates include a stop at ABC No Rio on 1/19. Full tour schedule is below.

Morbid Saint will hit the road for a pair of East Coast gigs that will include Europa on 1/20 with Deceased, Carcinogen and Midnight Hellion. Tickets are on sale.

Check out a new track from The Devil's Blood, as well as a teaser for a second track below. The band's new LP The Thousandfold Epicentre hits via Metal Blade on January 17th.

Maruta has called it quits.

Poison Idea will reissue Darby Crash Rides Again: The Early Years, The Fatal Erection Years (aka Pick Your King/Record Collectors are Pretentious Assholes), War All The Time, Ian Mackaye, Feel The Darkness, We Must Burn and Last Will & Testament via Southern Lord and TKO Records.

Pallbearer was great for the limited time that I saw them at Rites of Darkness (due to schedule changes), and now you can stream a new track from their forthcoming Profound Lore LP via Pitchfork. Look for Sorrow and Extinction via the label on February 21st.

On another note, this will be the final Evillive until the New Year, so have a happy one and make sure and leave any notes/comments below. Thanks for reading, and supporting independent music in 2011. All suggested shows, Weekend Nachos dates, and some streams are below.

The Devil's Blood "She" by Metal Blade Records