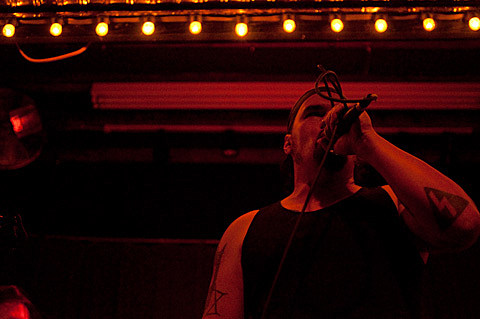 The previously discussed August 6th mega-record release at Saint Vitus for Disma with Coffinworm, an exclusive east coast appearance from Loss, and Oak will be a whopper of a show, and now tickets are on sale. Get 'em while you can. Meanwhile, Disma's mammoth new LP Towards The Megalith is due via Profound Lore next week and you can stream one new track, "Purulent Quest", for the first time below!

Raw Nerve, who ripped it at Chaos in Tejas, will team with White Load and Brain Slug to play Acheron on 7/24. Raw Nerve have a new LP and EP available now at Youth Attack. Speaking of Youth Attack, Mark McCoy's band Failures will play 538 Johnson on 7/31 with Vaccine, Confines, and Salvation. McCoy's other band Veins played the venue last week with Ceremony.

Reminder, tonight (7/8) is the return of Sourvein (who blessed our 2009 Northside showcase) at Saint Vitus with Kings Destroy, Strong Intention, Pristina, and Night Bitch. Cannabis Corpse has unfortunately dropped off.

The Austerity Program has scheduled a late show at The Charleston on 7/20 with a "special surprise guest". No word on who exactly it is, but we have our suspicions...

Ramming Speed will team with Barn Burner and Natur for a show at Saint Vitus on 7/31 as part of a larger tour for the former two. Their tour dates are below.

More suggested shows and some classic video from Dystopia, Keelhaul, Diocletian, and Benumb is below. What did we miss?