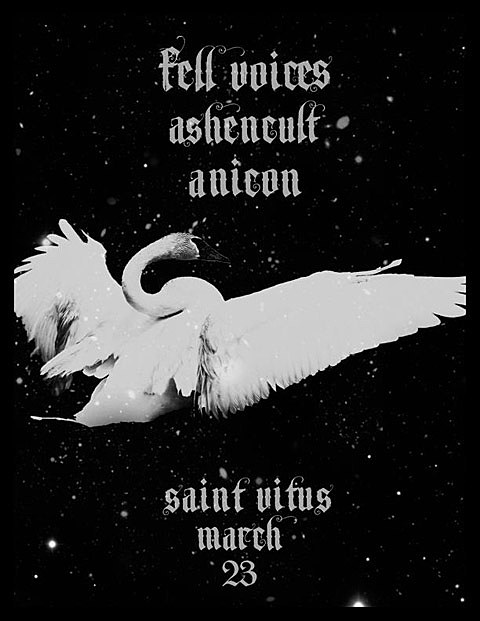 As mentioned, Fell Voices play their first East Coast show ever on Saturday at Saint Vitus (March 23, tickets) with Anicon and Ashencult. The date is a rare appearance before the band jets to Europe.

Couple of important changes to note: Psychic Limb has been added to Floor/Thrones show at Saint Vitus on March 29, and tickets are still available but not for long. Call of the Void's previously discussed show has been moved to Left Field on March 25 (87 Ludlow).

Russian Circles at Saint Vitus is now sold out! Hope you got tickets.

Is KEN Mode responsible for the Brooklynization of metal? Check out the article, which neglects to mention the fact that Pitchfork covered metal for years before writer Brandon Stosuy moved the column to Stereogum.

Grind and Punishment has a must-read oral history on the great Anodyne.

That's it for this week. A list of all Evillive-approved shows for the next two weeks, a stream of all of the new Iron Lung, along with streams of new Altar of Plagues and Uncle Acid, are below