Inquisition at The Studio at Webster Hall (more by BBG) 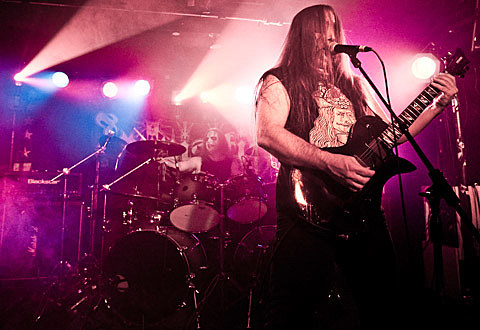 With the Dark Funeral dates officially off, Inquisition have announced a two night stay at Saint Vitus on April 26th and 27th. Ticketing info and support is forthcoming. Abigail Williams, who was also on the tour, have added a date at Saint Vitus on 1/30 with Woe in the wake of that cancellation.

Pitchfork is currently streaming the title track from the new Pilgrim LP, Misery Wizard, due via Metal Blade in February. Look for a new track on BrooklynVegan next week.

Inverloch, a new project featuring members of dISEMBOWELMENT (who, as dUSK, will play Roadburn this year) have signed to Relapse Records. Look for the band's new LP this Spring via the label. In related news, Huata have signed on for Roadburn as well. Stream their Atavist of Mann LP below. Download their new demo at Bandcamp, and stream it in full below.

Magic Circle, a new doom band that features personnel from Mind Eraser, The Rival Mob and The A-Team, will join Pilgrim, Windhand and Natur on March 1st as part of an incredible evening of (mostly) doom at Public Assembly. Its an unmissable night for doom fans, and tickets are on sale. Stream some Magic Circle material below.

Stream a new Pelican track from their forthcoming EP Ataraxia/Taraxis at Spin.

Check out a new Primitive Weapons song at Pitchfork, and look for their forthcoming LP, The Shadow Gallery, via Prosthetic this Spring.

Congrats to Code Orange Kids, who have signed to Deathwish. Stream their 7" below, and catch them on tour with Xerxes.

Tickets are now on sale for the Behemoth, Watain, The Devil's Blood, and In Solitude show at Irving Plaza.

I talked to Dave Smalley.

Last weekend I went down to Baltimore for the A389 Anniversary show. Pics and review HERE and HERE. A few of the bands also played Acheron one night earlier.

Suggested NYC shows and some streams are below.