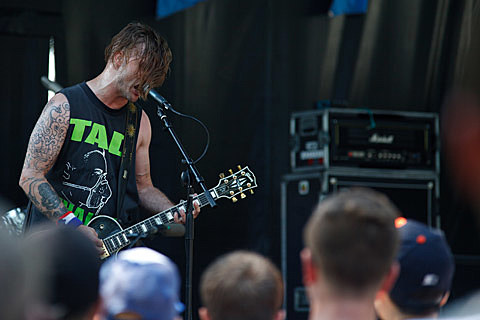 As mentioned, KEN Mode play Saint Vitus tonight (8/9) as part of their larger tour with Rosetta (who have a spankin' new LP). The band will team with East of the Wall and Tiger Flowers for the appearance, a whopper of a four-band bill. Don't miss it, tickets are still available.

Grecian black metallers Zemial impressed at one of their last US appearances, Rites of Darkness 2011. Now the band have returned from a seven-year recording hiatus to offer NYKTA, their new LP due via Hells Headbangers on, appropriately, Halloween. Stream two new tracks from the effort below.

Sci-fi obsessed death metal troupe Gigan is readying Multi-Dimensional Fractal Sorcery and Super Science, their new LP due on 10/15 via Willowtip. The effort features a pair of tracks that have made their way out, "Electro-Stimulated Hallucinatory Response" and "Influence through Ritualistic Projection," both of which are available for streaming below.

Don't forget that every week, you can tune into Invisible Oranges on East Village Radio on Tuesday at 10 PM Eastern to listen for the latest and greatest in the heavy underground. If you missed it, check out this week's episode in the EVR archives and you can check out the playlist too. Next week we will host Pitchfork editor and Show No Mercy honcho, Brandon Stosuy! Tune in Tuesday (8/13) at 10PM ET.

If you missed it, in the past week on InvisibleOranges we posted photos from the Raspberry Bulbs release show, streamed the new Dead in the Dirt, War Master, Anicon demo, a snippet from the new Jesu, and new albums by The Howling Wind and Orbweaver .

Those Zemial and Gigan streams are below...