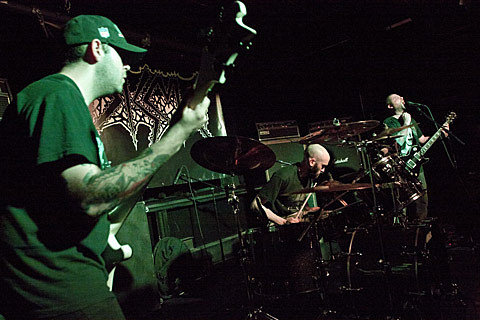 Unearthly Trance shows are few and far between nowadays, but the band will awaken from their live slumber to play Acheron on March 1st as part of a bill that includes The Communion, Water Torture, and Syphilitic Lust. $8 gets you in the door. Check out the flyer below.

Horseback has completed their new LP Half Blood due via Relapse this Spring. Details are limited so far, but Roadburn has more details about the record and its "amalgamation of drone, doom, black-metal, psychedelia, post-rock, noise, and ambience recorded with a wide array of instruments including guitar, bass, drums, keys, piano, bells, contact mics, field recordings, drum programming, noise and various signal processors." Yep, sounds like a Horseback record!

Check out a new Noisear track from their upcoming three-way split with Antigama and The Kill above. The track features vocals by Mitchell Luna of ex-Maruta fame.

Perdition will join Varix, Murderer and Sad Boys at Heaven Street Records TONIGHT (2/3). Door entry will cost you zilch and beers will cost you a dollar. Sounds like a winning night of furious, crusty punk to me.

Drainland will share a split 7" with Crows due on Suburban Mayhem Records. Stream the material from that release below.

Slices are preparing their new LP Still Cruising for Iron Lung Records. Look for it in the coming weeks and stream "Greensleeves" from the LP below.

One interesting and important footnote to the upcoming Behold the Arctopus show at Saint Vitus on Feb 24th... Support will come from Mindless Blasting and Geryon, two bands which feature Mick Barr with Nondor Nevai and Nick McMaster with Lev Weinstein respectively. Basically, a night of Krallice-related projects... should be interesting. Tickets are on sale.

Like Flipper, a reunited Sleepytime Trio are playing a show at SXSW in Austin this year.

No NYC dates, but Ringworm, Cancer Bats & Primitive are touring from Ohio to SXSW and then back to Ohio together. OFF! were also recently announced on the SXSW lineup.

YOB recently visited NJ with Tool. Right before that, they headlined their own show in Chicago with Anatomy of Habit and an opening set by YOB's Mike Scheidt who is going to release a solo album this year on Thrill Jockey. BV Chicago has pics from the Chicago show.

If you missed it, check out my interviews we just posted with English Dogs guitarist Gizz Butt and Mark "Barney" Greenway of Napalm Death. (Pilgrim too actually.)

A list of suggested NYC shows with song streams, the "Beaten & Left Blind" video by Landmine Marathon, and a set of European SUNN O))) tour dates, below...