Bloody Panda at Knitting Factory in May (more by Greg Cristman) 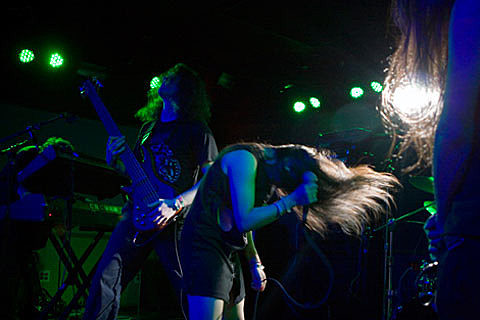 A reminder: Bloody Panda and French doom band Monarch! will kill Cake Shop dead tonight (11/12) with an assist from the fantabulous Tinsel Teeth. They'll do it again Saturday at Union Pool, but with Evoken instead of Tinsel Teeth. Both shows are brought to you by BrooklynVegan and Haunting The Chapel. Look for the great Rob Shaffer (of Dark Castle fame) behind the kit for Monarch!

If you can't make it to see Evoken, the band is playing Sunday (11/14) at Bowery Electric with Batillus, Man's Gin, and Moth Eater and Maegashira. Tickets are on sale. Evoken will also team up with Goreaphobia, Mutant Supremacy, Hessian, and Pilgrim to play Brooklyn Fire Proof on Dec 4th.

If you aren't into glacially placed riffs and thundering drums, this weekend has other choices in store for you.

Tonight (11/12), Neon Blud will team up with The Men, Pollution, and The Marsh Hens at Death By Audio. Saturday, Neon Blud will be at Brooklyn Brew House with White Suns, Pygmy Shrews, and Remnants. Full Neon Blud tour sked is below.

Acheron will host The Brought Low, Pigs, and Freshkills on 11/13 (Saturday) as part of a celebration for Coextinction Records, a new label brought to you by some of the twisted minds behind Unsane. Coextinction Records already as a few interesting records up their sleeve, including a new EP from Unsane, and releases from Goes Cube, Shrinebuilder (!), Pigs, Julie Christmas, and Freshkills. Stream some of those new tracks now.

More of my picks for the shows of the week, as well as some video is below...

Freshkills - I Know I Know