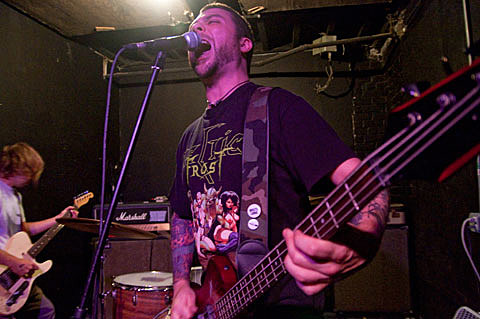 Ryan Lipynsky will play Union Pool TONIGHT (2/12) with Unearthly Trance, and his punk/hardcore project Pollution will team up with Vancouver 's White Lung and Philly's Salvation to slash and burn down Acheron on April 8th.

Pollution recently made my 2010 fave ® smut which is available for free download, but in a different version:

"I've noticed the one thing out there people have said about pollutions latest recording is that "snare sounds like shit" or "drums sound weird" etc. I can tell you our superb drummer elsner wasn't/isn't happy about it either. So as I listened back to these "unmastered" versions I noticed the snare was less "woodblock" sounding but probably not as present in the mix."

Download to contrast/compare to the original LP, which is still available for sale.

The Acheron show is part of a larger East Coast tour for White Lung and one of two NYC dates, the second being on 4/9. No word on where that will go down or with who, but until then check out the new White Lung video for "Sleep Creep" below. Pick up their latest full length It's the Evil, out now on Deranged Records.

Outside of Acheron, Salvation have a few other scheduled shows too. The band will head to Austin to play SXSW, logging the final show with Total Abuse on March 19th. Salvation released Mortality Interactions via Youth Attack last year. The LP is currently sold out, no word on a repress thus far.

All White Lung dates, current suggested shows, and some video is below...