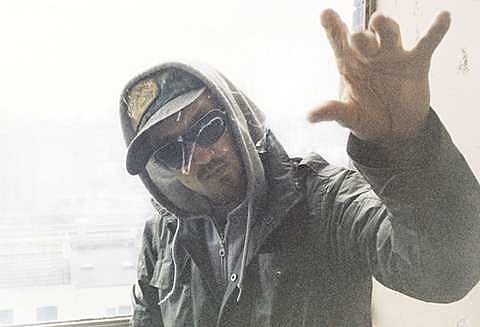 Earlier this year, The Bug (aka Kevin Martin of King Midas Sound) announced that he'd be starting a new label and sub-genre called Acid Ragga, which will be an imprint of Ninja Tune. The first release for the label is a single called "Can't Take This No More" which features vocals from Daddy Freddy b/w "Rise Up" featuring vocals from Hype Williams' Inga Copeland. You can stream a clip of "Can't Take This No More" below.

The Bug just revealed in an interview with FACT that he's been talking to Evy Jane about putting out a single of theirs on his new label too:

When I contacted Evy Jane, Jeremiah, the dude from the group, had seen me live about five years ago in Canada and he said it had been a totally formative experience. And the girl from the group, Evelyn, was massively into grime and ragga. It's just weird, man, weird synchronicity, and I can't even pretend to understand it, but it's great. Extending the past, and just building for the future.

Evy Jane were supposed to play Glasslands tonight (5/29) but unfortunately had to cancel their appearance. Instead, tonight the Brooklyn venue will host No Glow, Night Shining, Gracie, and Beca. Tickets for that show are available.

In The Bug's FACT interview, he also spoke about working with Grouper (Liz Harris) for his new album, Angels & Devils, which will also feature guest appearances from Death Grips, Gonjasufi, JK Flesh (Godflesh/Jesu), The Spaceape, and Flowdan + Warrior Queen. On working with Grouper, The Bug said, "When I contacted Grouper, I was stunned that she'd even heard of me, and doubly stunned when she told me she'd been playing her mum 'Skeng' about two weeks before."

The album will be one of the many projects Liz has been involved in this year, including the excellent collaborative album with Tiny Vipers as Mirrorring, Foreign Body, the score for The Perception of Moving Targets, which screened at this year's Sundance FIlm Festival, the two-track but almost hour and a half long CD-R, Violent Replacement, and a recorded cover of Dead Moon's "Demona," which you can download above or stream below.