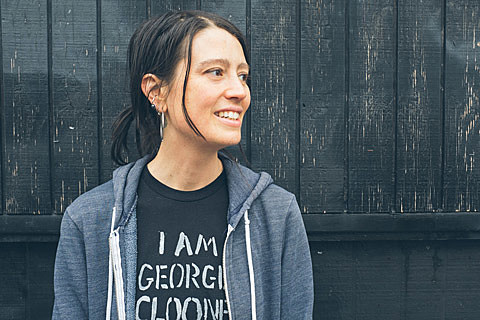 Onetime Carissa's Wierd singer Jenn Ghetto has been releasing records as S since the band broke up back in 2003. (Carissa's Wierd would also spawn Band of Horses and Grand Archives.) But up until now they were four-track home recordings. With the forthcoming Cool Choices (9/23, Hardly Art), S is now an actual band. Says Ghetto:

At the start of 2012, in the middle of a break-up, I started writing this record. As with the others, the songs all started in my bedroom, but I convinced my metal drummer friend Zach McNulty to help me flesh them out (you guys, he uses a lot of restraint), along with my longtime friends Betsy Olson (bass) and Carrie Murphy (guitar) because I knew they were talented, I liked being around them, and they both had cars.

We spent about a year getting the new songs livable. We played around Seattle, and then Hardly Art was like, "Hey if you are gonna make another record we would like to put it out." I got to know them when they reissued the Carissa's Wierd catalogue in 2010. And I was like "Yessssss!" So I tracked down Chris Walla (Death Cab for Cutie) to engineer and produce this thing. I had worked with him on a few Carissa's Wierd albums some years back, and thought he would be a perfect fit.

Chris Walla brings a similar production style to Cool Choices that he did to Now Now's Threads and you can hear for yourself via first single "Vampires" which is streaming below.

S will be touring this fall, hitting the East Coast in October, including a visit to NYC during CMJ. No details beyond they'll be here then have been announced, but all other dates are listed, along with the song stream, below..