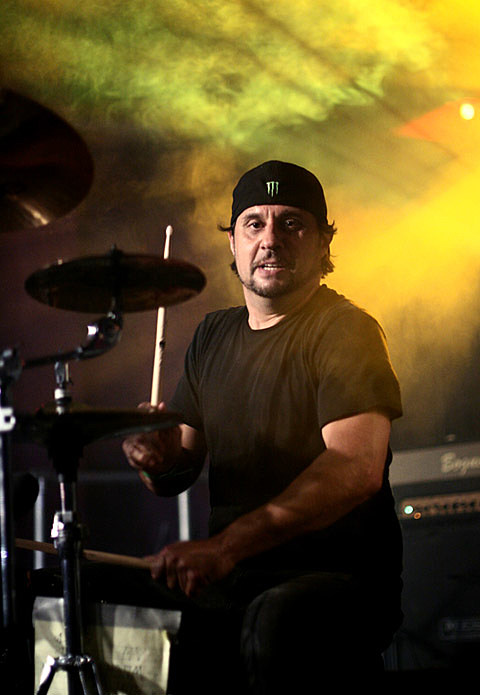 Dead Cross is a punk band, first and foremost; they haven't recorded anything yet (bearing in mind that they literally formed a week ago), but according to Lombardo, it's going to be fast, mean, and ugly. "It's just straightforward brutal punk-- metal-esque, but it's definitely not metal. I think it definitely leans more towards the punk style, because I feel that the way things are in the world, a punk attitude is definitely necessary to help you along with the shit that's going on. There's no time to sing "We Are the World," or all this bullshit, we're all pissed right now, and there's no better way to release anger than to be in a punk band and write punk music." [Noisey]

Legendary Slayer drummer Dave Lombardo's band Philm just broke up, and not one to rest on his laurels, it seems Dave has already found a new band. He's formed Dead Cross with The Locust's Justin Pearson, Justin's Retox bandmate Mike Crain and Locust/Head Wound City bandmate Gabe Serbian (who has also drummed for Le Butcherettes and Cattle Decapitation) taking over vocal duties. According to Lombardo, this will be fast, loud punk rock. They don't have any recordings yet, and their first shows will be a couple of LA-area dates in early January.

Pearson, in particular, has been biting off a ton of projects lately, and Dead Cross is sort of a union of several of his other bands with one of the most significant drummers in the history of heavy music, so that's pretty exciting. His weirdo electronic project Planet B just released a new 7", and presumably Dead Cross will soon work on recording some stuff. The man stays busy.

Check out those dates and a sweet Lombardo drum solo below...