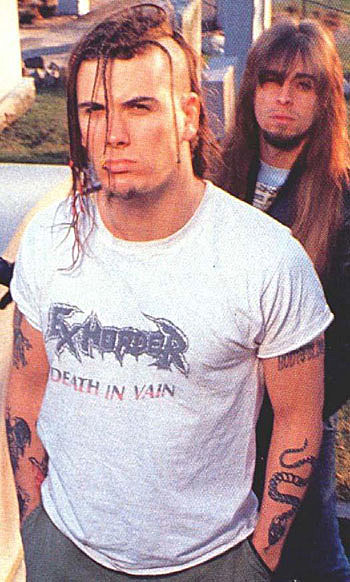 Some say they created groove metal, a sound that Pantera later perfected. I say that Exhorder never got the respect they deserved and in a year of unbelieveably awesome reunions, add this one to the list!

The band, who originally split in 1992 but reunited for gigs in 1998, 2001 & 2003, (according to the worlds most accurate encyclopedia) are currently "writing new material for the return of Exhorder"(from their myspace). Until more details arise, look for the band's long lost records Slaughter In The Vatican & The Law to get the limited edtion (2,000 copies) reissue treatment when they are released July 8th on MVD.

Now all we have to do is pray for some shows, and more specifically, some outside of NOLA.

Footage of Exhorder recording Slaughter In The Vatican

Exhorder performing "Homicide" during their three song reunion in 1998