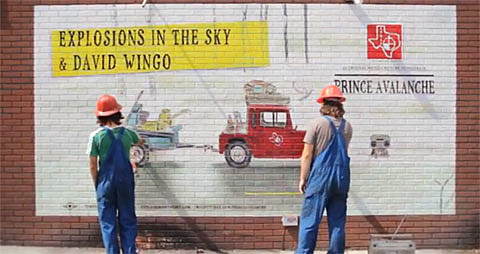 Explosions In The Sky & David Wingo's stirring soundtrack for David Gordon Green's meditative new film, Prince Avalanche, was released last week. To accompany its release, a beautiful panoramic mural was painted on a wall across from McCarren Park in Williamsburg, Brooklyn.

Jeremy deVine, founder of the band's longtime label Temporary Residence Ltd., documented the painting of Esteban Rey's signature artwork. The film documents the 3-day painting process from color mixing to final brush strokes, and features the painters wearing the same iconic overalls and hard hats worn by Paul Rudd and Emile Hirsch in the film (and listening to the same vintage boom box). The video is scored by soundtrack's closing song, the standout "Send Off".

The mural painting, pictured above, is on the side of Turkey's Nest Tavern in Williamsburg. Temporary Residence were also the ones responsible for that recent Pinback mural in Williamsburg, the documented creation of which became the "Proceed to Memory" video (which we posted with news of Pinback's upcoming tour).

Watch the videos of both murals being created, along with all upcoming EITS tour dates (we recently caught them at Osheaga), below...

---
Explosions In The Sky & David Wingo - Send Off