Explosions in the Sky @ Sasquatch 2009 (more by Chris Graham) 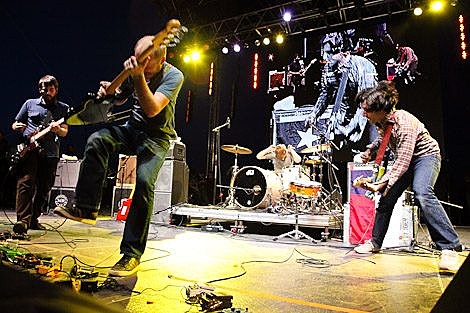 Explosions in the Sky, Constantines and Castanets are playing Central Park Summerstage on Tuesday, June 30th. Tickets for that, which is not one of the NYC park's free shows, are sold out.

Castanets also have a NYC show coming up at Cake Shop on July 10th - part of a much larger July tour. All dates below.

Later this summer, EITS will be opening several dates for the Flaming Lips. Billboard writes that, "Concertgoers who buy Flaming Lips tickets online will receive a digital EP with new songs "Convinced of the Hex," "The Impulse" and "Silver Trembling Hands" [from the Lip's forthcoming album Embyronic]," as well as "three digital B-side tracks" and a "digital download bootleg of the concert they attended."

Explosions in the Sky was also scheduled to play Broken Social Scene's Olympic Island Festival on July 11th. That show has been canceled because, among other reasons, the Molson Indy was scheduled for the same day nearby. BSS's Kevin Drew wrote, "For us to ask, Rattlesnake Choir, Apostle of Hustle and Beach House to play while the sounds of racecars roar across the lake is absolutely ridiculous and insulting."

Instead, there will be a free Broken Social Scene show the same day at Toronto's Harbourfront Centre. Rattlesnake Choir will open. The gig is one of a few July/August dates for BSS, who're recording their fourth full-length album in Chicago with John McEntire of Tortoise. The record will be their first without the production of David Newfeld.

Broken Social Scene recently played a surprise show at Arts & Crafts' NXNE showcase on June 17th. The performance included some new-album material and an appearance by Feist who is rarely a member of BSS these days, and who recently sang at a Grizzly Bear show in the same city. Videos, with the above-mentioned tour dates, below...