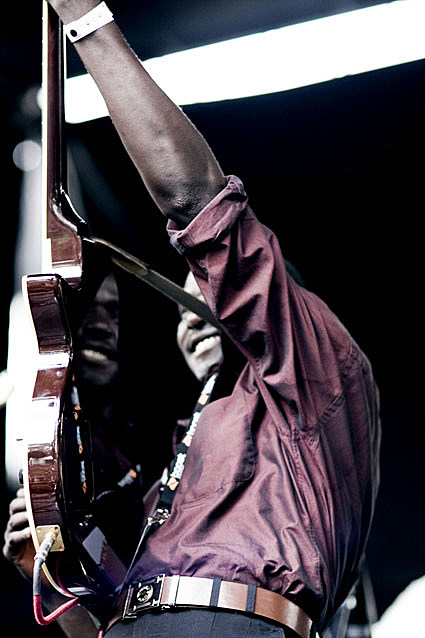 "I'm sending a special thanks," sings Extra Golden's Opiyo Bilongo on the band's song "Obama," which you could consider an audio thank-you note to the senator from Illinois. For Extra Golden, the support, and the gratitude, are of a distinctly personal bent.

Bilongo, Onyango Wuod Omari, and Onyango Jagwasi, the Ken-yan members of the group, probably would never have gotten to tour the United States without Barack Obama's help.

In 2006, the band ... was scheduled to play a world-music festival in Chicago. But the Kenyans had run into some difficulty with the Department of Homeland Security and were in danger of missing their first chance to play for an American audience.

"A woman named Jenna Pilat from Obama's office - she went into the office at midnight so that she would be there when the embassy in Nairobi opened," remembers guitarist Alex Minoff. "She got on the phone with them, and we were on the phone with our guys, and we were all in touch with each other. And about five hours later those guys walked out of the embassy with their visas, and went home, got their bags, and went to the airport."
[The Boston Globe]

Extra Golden play a show with Icy Demons @ Knitting Factory in NYC tonight (July 29, 2008). This show is in addition to the two they're playing in NYC in August.