DOWNLOAD: Eyedea & Abilities - "This Story" (MP3)
DOWNLOAD: Freeway - The Beat Made Me Do It (Mediafire, Zipped MP3) 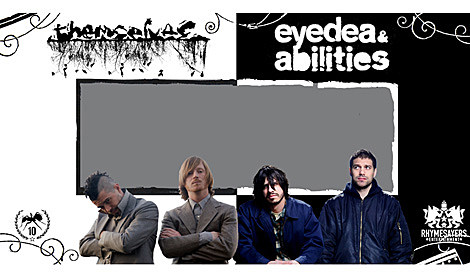 Themselves are on the road with someone else, namely Rhymesayers duo Eyedea & Abilities. The pair are currently getting ready to spend Thanksgiving day somewhere between DC (11/25) and Brooklyn, and are scheduled to take on Knitting Factory in NYC on 11/27. Tickets are on sale. E&A are touring off of their recent LP, By The Throat, their first in five years. Dig on "This Story" from that LP above, along with videos for "Smile" and "Junk" below.

In other Rhymesayers news, Slug of Atmosphere & Murs have issued their latest ode to female actresses, FELT 3. This time, their muse is the queen of White Men Can't Jump and Do The Right Thing, Rosie Perez:

B-List actresses be warned and flattered because FELT is back! Slug (Atmosphere) and Murs (Living Legends) reunite for their third release from moniker FELT. These MCs teamed up with The Grouch (Living Legends) in 2002 to release FELT's debut album A Tribute to Christina Ricci. Collaborating with producer Ant (Atmosphere) in 2005 resulted in their second coming A Tribute to Lisa Bonet. With the fresh addition of Aesop Rock (Def Jux) on production and unwavering love for those forgotten actresses who warmed their hearts, Slug and Murs are pleased to present FELT 3: A Tribute to Rosie Perez...

That LP is out now on Rhymesayers Entertainment, along with the new Freeway mixtape The Beat Made Me Do It featuring Don Cannon (cannon, cannon, cannon) on the wheels and Jake One on the pads. Download that above. Freeway will issue The Stimulus Package via Rhymesayers Entertainment on Feb 16, 2010. Freeway was once a frequent collaborator with Jay-Z who is set to play the Izod Center and Nassau Coliseum this spring.