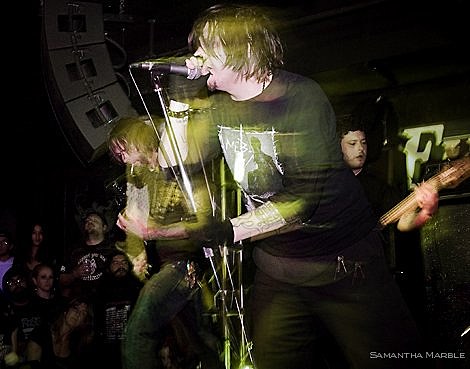 Now, BrooklynVegan and Osiris are proud to announce another unmissable lineup: Eyehategod with Brutal Truth, Nachtmystium, Black Anvil, and Tombs at Europa on June 12th! Ticket info is forthcoming, as well as their full US tour sked. Meanwhile, EHG is also scheduled to play Emo's in Austin on May 7th to perform all of In The Name of Suffering and Take As Needed For Pain. Drool.

Both EHG and Tombs are also playing MDF 2010 (which recently added Nirvana 2002 and Krallice). Tombs recently played the Relapse showcase at SXSW along with Voivod, Kill The Client, and many others. We have pics from that coming soon.

Black Anvil can be seen much sooner. They play NYC on TUESDAY (3/30) with Immortal at Brooklyn Masonic Temple. Tickets are still available. The band recently finished tracking their new LP, Triumvirate. Want to win a pair of Immortal tickets? Details how are at the bottom of this post...

As previously discussed, Nachtmystium's Addicts: Black Meddle part II is on the way via Century Media. Look for it June 8th.

All currently announceed Eyehategod dates, some videos and the contest below...

Eyehategod live on a boat!

To WIN A PAIR OF IMMORTAL TICKETS: Email BVCONTESTS@HOTMAIL.COM (subject: I am Immortal! ). Include your first and last name. I'll throw a dart at my computer and pick a winner and contact them ASAP.