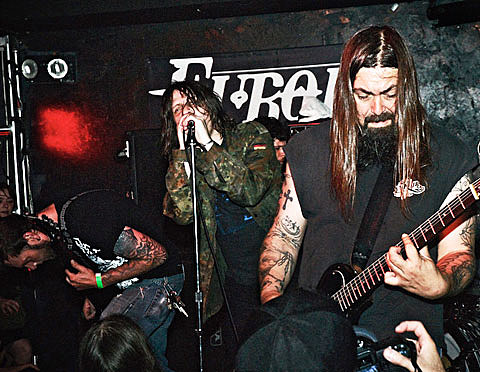 Mike "IX" Williams of Eyehategod: Maybe only driving around the country in the shape of a crooked pentagram because of poor tour routing. Also we've played in a couple clubs on this last tour that were seemingly built for Spinal Tap only!

The Gauntlet: What were some of your favorite releases from 2010?

Mike "IX" Williams of Eyehategod: 2010 saw a new Killing Joke album and I been digging on that a ton. A few other records I like are the Crazy Spirit 7", new Autopsy, Sleepies, Triptykon album, Double Negative new one, Die Wasted cassette, Floor box set, everything on Housecore Records....

The Gauntlet: What's on your ipod?

If he has time, maybe you can sit Mike down and discuss Brian Eno when Eyehategod hits Europa on February 18th along with Misery Index, Magrudergrind, Strong Intention & Mutilation Rites. Ticket info is forthcoming. The show is one of a few dates scheduled for the New Orleans crew that includes an appearance at Hellfest in France.

Arson Anthem, the supergroup containing Phil Anselmo, Mike Williams and Hank Williams III, has a few southern dates in the near future too. All tour dates and some video is below.

--
Eyehategod - Jackass in the will of god