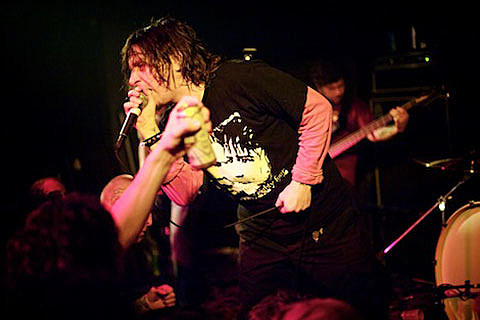 At roughly 4:30am on Friday, May 7th, I dragged my sorry ass through the doors of Philadelphia International and stumbled towards my gate, getting the usual hairy eyeball that all pierced, tattooed longhairs can expect to receive from the cranky security guards and sinking into a ripped polyurethane seat to wait. Ten hours, one flight fuckup, one rerouting, and a few thousand miles later, I was in Austin, TX, walking up to 600 Red River Street to catch the mighty EyeHateGod unleash hell at legendary dive Emo's. The NOLA sludge warriors were due to play their first two dystopian masterworks, In the Name of Suffering and Take As Needed for Pain, and there was no way I could miss it. EyeHateGod are the granddaddies of the viscous bastardized Southern hardcore that is New Orleans sludge, and now that all the members are legally allowed to cross state lines, have been touring like madmen across the US and Europe.

ED: Check them out on the road and at Europa on June 12th with an unreal supporting cast (tickets are still avail). The Austin review and pictures continue below... 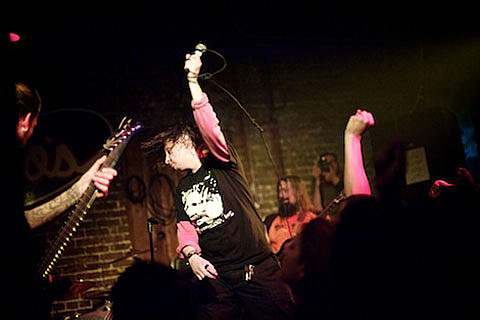 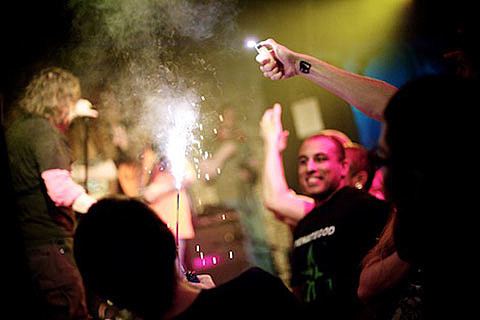 Here's what went down. I got to Emo's around 9:45 pm that night, fully expecting to have missed Austin's best-kept secret, The Roller. Luckily for me, Austin is one hell of a late town - the first band didn't even start tuning until 9:50. If you haven't heard or at least heard of The Roller yet, get thee to their Myspace page and check 'em out. An unholy mish-mash of death, black, and doom, rooted waaay down deep in the murky cesspool of Southern sludge, this hirsute quartet tore up that stage like a ten-dollar whore. Sweaty Southern rawk licks fought their way through riffs as slow, thick and black as melting tar, and frontman Mike Morowitz howled mockery at the cross through a throat coated with cheap bourbon and razor wire. Thirty or so minutes later, they were through, and left us all feeling dirty. 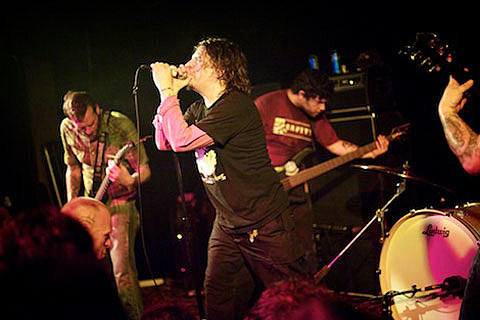 I'd seen Iron Age a few months previously on their jaunt with Skeletonwitch, but hadn't been overly impressed by their live show. This time, though, it seemed like the devil - or maybe the menacing thrill of playing for a roomful of diehard EyeHateGod fans - had lit a fire under their asses. They were feverishly hauling out enough dirty Southern grooves, balls-out thrash, and shards of vicious hardcore punk to drive the crowd nuts; some guy got thrown out during their first song for raging too hard, and I'm willing to bet he wasn't the first. Iron Age definitely upped the ante tonight, and won themselves a lot of respect from a wicked-tough crowd. 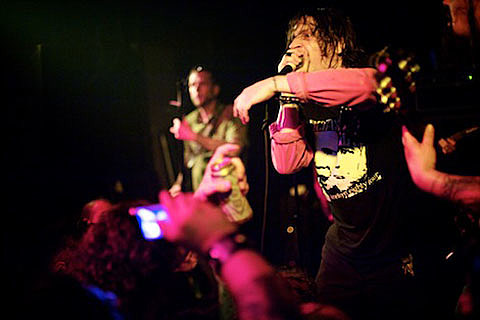 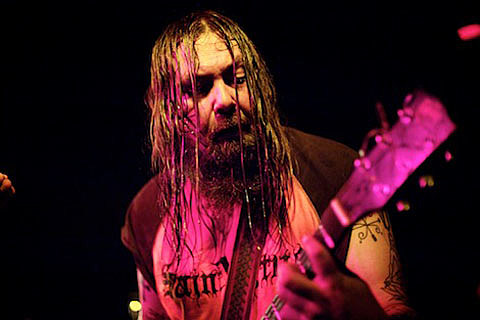 "What time is it? Oh, damn, we're supposed to be on now," a supremely chilled out Jimmy Bower remarked with a small measure of surprise. He and the other dudes had collected in Emo's spartan backstage area to shoot the shit, squeeze their ladyloves (Jimmy's girlfriend and Gary's wife had both come along for the ride) and indulge in a couple choice substances. "Want a sip? It's fuckin' strong," Mike cautioned me, passing over his mammoth glass of cranberry & vodka before proceeding to down the rest of it in one. 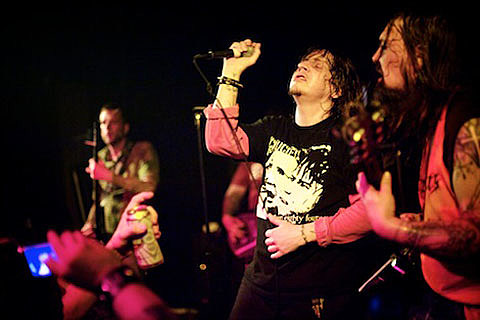 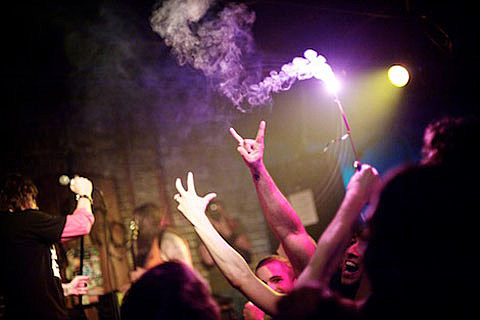 "Black metal from the ghetto! Black metal from the ghetto!" replaced EyeHateGod drummer Joey LaCaze's familiar pre-show war cry of "pussy and heroin" this time around. The crowd had grown restless, and a few stray cups and insults flew past us in the front row to litter the stage. Grinning widely, the band gradually situated itself, tuned up, tossed back a few sneers at the audience, and got down to it. The sickly strains of "Depress" slammed into the crowd like a piledriver, leading into "Man Is Too Ignorant To Exist," "Shinobi," "Pigs," and all the rest. EyeHateGod plowed through the record with barely a minutes' rest, stopping only to re-up on cigarettes and beer, noodle through a few blues licks, or allow Mike to spit out a few words of abuse. 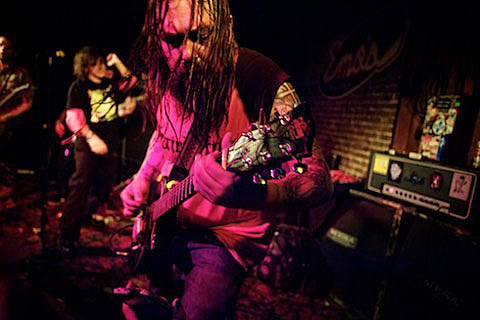 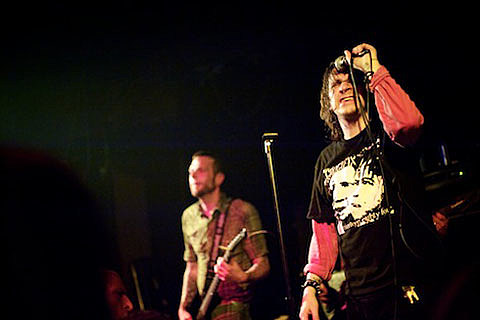 The notoriously volatile frontman was much mellower than usual, and the others - Jimmy Bower, Brian Patton, Gary Mader, and Joey - were clearly in a great mood. Ending with "Hit A Girl," the guys called for a ten-minute break. More cigarettes, more beer, a couple more cracks from Mike and some hecklers calling for Dopesick later, and they were back, covered in sweat but still going strong. If there's a better opening track on an album than "Blank," I haven't heard it. That shit KILLED, then the rest of the album - "Sisterfucker (Part II)," "Shoplift," "White N*gger," "30 Bag," et al - burned it into ash. Fists went flying and throats were scraped raw during "Sisterfucker (Part II)" as the entire front half of the crowd screamed along - "BURN HER!" - and a near-constant mosh pit of burly shirtless dude raged a few rows back. 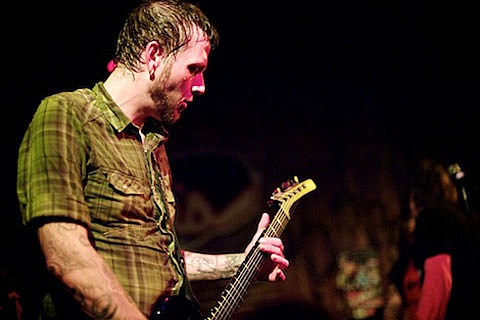 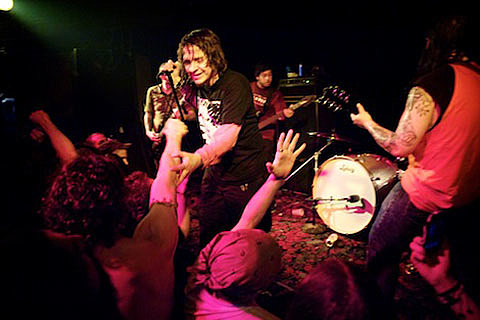 The raw, corrosive power of EyeHateGod's early material is undeniable, and is made even more apparent live, dredged up by five beaten-down riff warriors with nothing left to prove and everything to lose. As the icing on the prison cake, the band hauled out a few classics from the immortal Dopesick to close out their nearly two-and-a-half-hour-long set. "Dixie Whiskey," "Serving Time in the Middle of Nowhere," and an incredibly vicious "Methamphetamine" were almost too much for the whiskey-drunk and riff-worn crowd to take, but both band and fans squeezed their last drops of energy into making those last three odes to pain and druglust fucking count. As the disturbed glitches of "Laugh It Off" echoed through the emptying venue, the guys ambled around the stage, unplugging, wrapping, shoving, and generally ignoring the fact that they'd just laid down a set that is doomed to infamy. As always, EyeHateGod's only concern lay in being, staying, and surviving EyeHateGod. 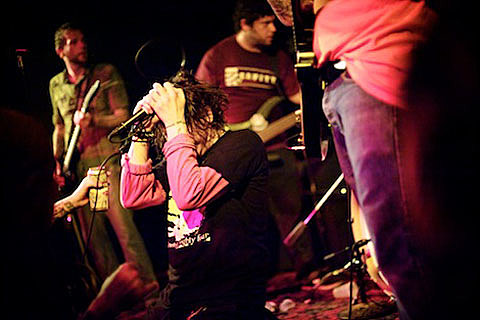 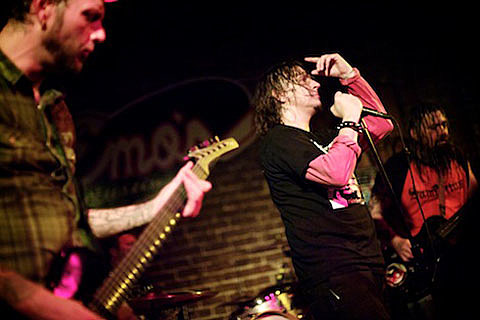 EYEHATEGOD - "Depress" from Im The Name of Suffering Live

EYEHATEGOD - "Shinobi" from Im The Name of Suffering Live

EYEHATEGOD - "Pigs" from Im The Name of Suffering

Another chance to see the albums again in Chicago:

"EYEHATEGOD -- Bower, Patton, Mader, vocalist Mike Williams and drummer Joey LaCaze -- will kick off their long-anticipated US tour alongside psychedelic black metallers Nachtmystium (from June 4 - 15) and a rotating roster of other eclectic openers on June 3 at Blackbooth in Orlando, Florida. The band will pillage through 16 cities before winding down in Chicago for two dates at the Empty Bottle where they will again perform In The Name Of Suffering (June 19) and Take As Needed For Pain (June 20) in their entirety. If you missed it the first time, now's your chance!"