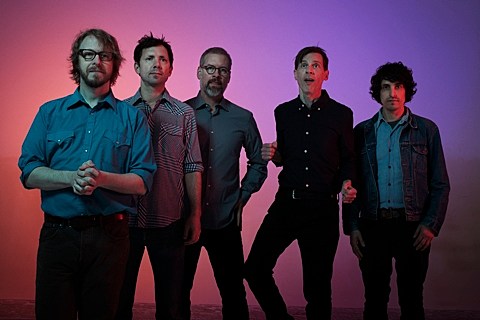 Portland's Eyelids is the project of The Decemberists' John Moen, and Chris Slusarenko who was a Guided by Voices member in the 2000s (both also played together in the Robert Pollard-fronted Boston Spaceships). Their upcoming self-titled EP was produced by R.E.M.'s Peter Buck (who's also contributed to The Decemberists), and his band's jangly alt-rock isn't too far removed from the EP's new single, "Bound To Let You Down." That premieres in this post and can be streamed below.

The EP comes out June 23 via Jealous Butcher and the band's own Schizophonic Records, and features one other original song, as well as covers of John Cale's "Only Time Will Tell" and The Dream Syndicate's "Halloween." A limited edition colored vinyl version is also being released, which includes a download card with three exclusive live videos, one of which has Stephen Malkmus performing "Hey Joe" with the band.

Last year, Eyelids released a split with Woolen Men. Listen to the new song below...