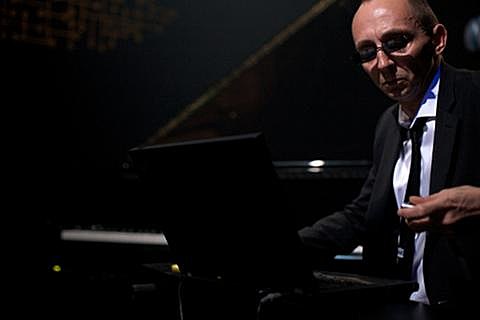 FACT recently posted their Top 40 Best Reissues of 2012 list (check out the whole thing HERE) and the number one spot went to Monotonprodukt07, the 1982 album by Monoton (aka Austrian electronic musician Konrad Becker). FACT also interviewed Becker on the reissue earlier this year, and regarding the album, they write:

Monoton's Monotonprodukt07 isn't just a case in point - casting an eye down this year's reissue schedule, it's the case in point. Originally issued in a limited run of 500, Konrad Becker's 1982 LP has had currency in rarified electronic circles for decades. It took a series of CD reissues (in 2003 and 2009 respectively), plus the online efforts of bloggers and enthusiasts, to return the disc to a largely unwitting public. Desire's long-awaited vinyl reissue completes Monotonprodukt07's long, slow crawl towards classic status.

The music itself still has the unmistakable aura of a classic. It's a bleak, startling, solitary work, tilting from viscous dark ambient ('Soundsequence') to proto-dub-techno ('Root Of 1 = 1′) to parallel-dimension krautrock ('Fire'). Diverse without ever losing focus, it's as rich and enveloping a record as you'll hear all year. Thirty years on, Monotonprodukt07 doesn't just stand up - it stands alone.

You can stream some material from that album below.

Monoton will celebrate the reissue in NYC this Saturday (12/15) at Pianos for what will be his first NYC show ever (exciting!), and it's being presented by Scott Mou and Control. Doors at 11 PM, live set at 12 AM. Tickets are on sale now.