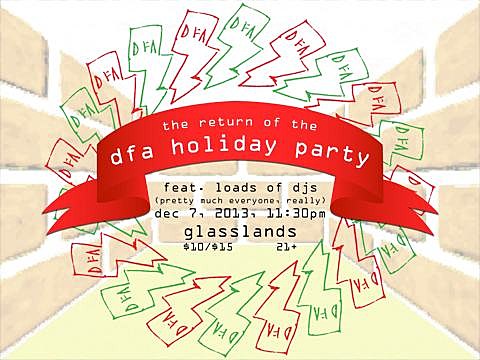 DFA Records has had an eventful year, celebrating its 12th Anniversary with one of the biggest parties of the year. They'll close out 2014 with a much smaller NYC holiday party, happening this Saturday (12/7) at Glasslands featuring "Very Special Guest DJs." The party flyer says "loads of DJs (pretty much everyone, really)" which given their roster could be some cool people. Their holiday parties at Studio B were always fun. Tickets are on sale now.

In other DFA news, Factory Floor's upcoming tour will be in NYC next week for shows at 285 Kent on December 12 & 13. Tickets are still available for the 12/12 show though no openers have been announced yet. (12/13 is sold out.) As mentioned, the band are releasing "Turn it Up" as a new single next week (12/9), featuring remixes by Laurel Halo and Detroit techno legend (and surely a big influence on FF) Carl Craig. You can stream Carl Craig's remix, which chills out their frantic sound just a bit, below.

All Factory Floor tour dates are listed, along with the remix stream and DFA Holiday Party flyer, below...