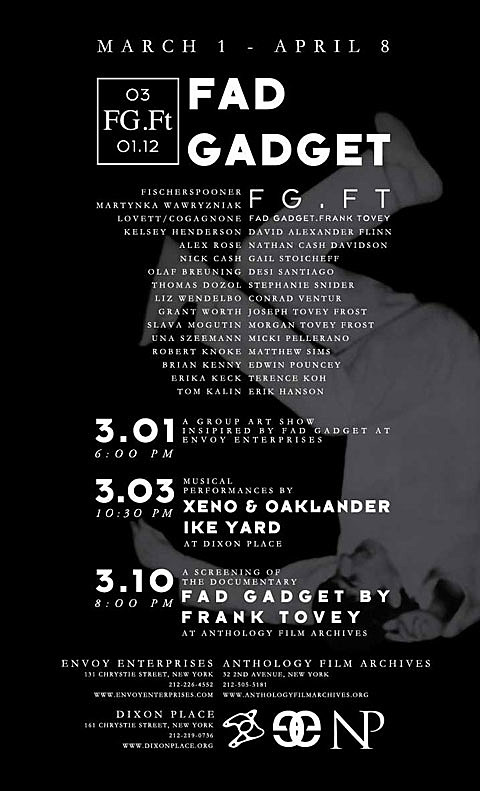 As Fad Gadget, [Franklin Tovey's] music was characterized by a use of synthesizers in conjunction with sounds of found objects, including drills and electric razors. His bleak, sarcastic, and darkly humorous lyrics, often layered in meaning and discussing subjects such as machinery, building construction, human sexuality, and physical violence, were sung in a droning, often expressionless voice... He continued to perform live, and was working on a new album at the time of his death. Tovey suffered from heart problems since his childhood, and died of a heart attack on 3 April 2002 at the age of 45.

Xeno & Oaklander will play Saturday at Dixon Place (3/2) with Ike Yard as part of month long celebration of Fad Gadget in rememberance of the 10th anniversary of his death. The celebration of the man, Mute Records' first signing in 1979, will include an art exhibition which opens tonight (3/1), the show, and a screening of the documentary Fad Gadget by Frank Tovey at Anthology Film Archives on 3/10. All events are free and open to the public. For more on the celebration see the flyer above or the the website for more details. Full roster of participating artists is below...