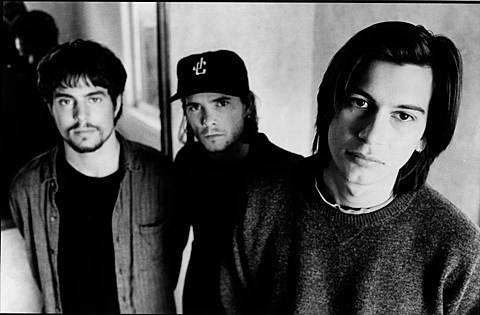 Los Angeles's Failure have released their first new studio material in nearly two decades. "Come Crashing" appears on the band's EP Tree of Stars, which will be available on their current reunion tour throughout North America. The extended player features four live versions of past classics with "Come Crashing" providing a fitting finale.

Began in 1990, Failure fused painstakingly created spacey sonic layers with the immediate guitars of the burgeoning alt. rock boom. Studio wiz and singer/guitarist Ken Andrews, along with bassist Greg Edwards and a rotating cast of drummers, crafted melancholy, reverb rich rockers that one could get lost within. They released three LPs during their initial run that lasted until 1997. The last album, Fantastic Planet, was released on Warner Bros. and grew steadily in stature to be recognized as something of an overlooked major label casualty. Similar to Hum, Failure was on the fringe of popularity in their own time, yet developed a dedicated following after their split due to the spread of their influence (Cave In) and popular cover versions of their material (A Perfect Circle).

"Come Crashing" is refreshing in its adherence to Failure's old timbres without ignoring Ken Andrews' maturation in post-Failure projects such as ON and Year of the Rabbit. It begins with Andrews' pleasantly weary vocals and his ever-so-slightly acidic guitar chords. The track builds, stacking layer upon layer, resulting in something close to an alt. rock symphony. At the 3:30 mark, the song hits its release, finally resolving the progression hinted at throughout.

You can hear "Come Crashing" and pick up Tree of Stars at various tour stops, including three NYC-area dates: May 29 at Irving Plaza, May 31 at The Stone Pony and June 3 at Music Hall of Williamsburg (tickets). The group will also perform at Chicago and Denver's Riot Fests.

All dates are listed, along with the "Come Crashing" stream, below...