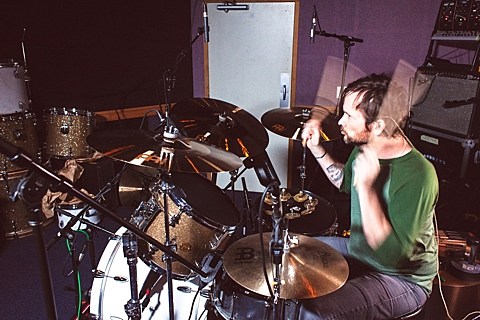 You've read parts 1, 2, 3, 4 and 5 of Failure's studio diary for their upcoming The Heart Is A Monster, and here's the sixth and final part. This one's written by drummer Kellii Scott, and you can read it below.

We're just two weeks away from the release of Failure's new album, their first in 19 years, which comes out June 30 via INresidence. Today they put out the video for one of its singles, "Hot Traveler," and you can check that out below too.

As previously mentioned, the band is also touring, including a co-headlining run with Hum that hits NYC on August 13 at Webster Hall. Tickets for that show are still available. Failure also have a Long Island show in July without Hum.

Full list of tour dates, the new video, and the final part of Failure's studio diary, below...

The Early Songs, by Kellii Scott

It's about 1 pm, some time in March or April 2013. My phone rings and I don't answer it because I'm deep in preparing someone's drum set for their tour and I'm at the backline company where I worked when I wasn't out on tour or a gig myself. A few minutes later I check my phone and see that the missed call was from Ken whom I don't hear from that much so I'm already assuming it may be some kind of work surprise so I immediately call him back. "Hey man, how's it going, what's shaking?" He returns, "A lot, I don't know if you've heard but Greg and I." BAM!!! Stop there!!! I kinda zone out on everything after that because I know what he's gonna say and my heart is so far up in my throat and eyes that I couldn't possibly hear the rest of his explanation about why, when and where he and Greg are now friends. I sorta zone back in 2 minutes later to half hear him say that they have been working on some new music and are almost ready to put drums on it, would I be interested. The words "FUCK YES" fly out of my mouth before my brain ever told me to say it. I am flooded with any and every emotion I've ever had. I need to get off the phone and figure out what the hell just happened but before I hang up he tells me he'll get me some tunes over the next few days.

The next few days, I'm really excited, cloud 11 type of stuff. It's the phone call I've been imagining and waiting on for years. Then, after a few days, the music arrives and I put it on. That's when everything gets very strange. I can't hear what this is, I don't understand this; I cannot decipher the enigma. All of my abilities of identifying and interpretation have frozen. I wasn't entirely certain what I was expecting to hear and I'm even less certain whether this is it or not. This has never happened to me before, my critical mind has never failed me in matters of understanding like this. I am so overwhelmed that this day has arrived with all of its emotions of regret and fear of the future; I am paralyzed and genuinely scared that my mind cannot see me through this predicament. Is this music great? Do I wanna do this? Should we just leave it alone? What if we ruin it? Question after question of doubt and unease. This is not how I imagined this day all these years later. This is really messing with me. I'm gonna take a step back from this for a day or two and see if I can reconcile my feelings and fear then get back to listening to the music. So I have a chat with my inner buddy here and there over the quiet parts of the next few days and honestly I make myself feel a bit better about it. I see it for what it is. I have the opportunity to heal old wounds and mend friendships. It's a second chance to fix the mistakes of the past. My initial freak out actually had very little to do with the music itself but everything to do with figuring out how to untangle the multitude of competing emotions I have over the prospect of us just being together again after all these years. 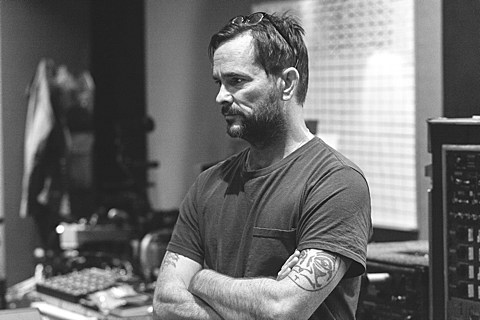 I get back to listening to the tunes... "Mulholland Dr." is immediate, I get it. It's beautiful and big and majestically orchestrated, it's a total gem. Very slow, which if any of you know, those are the more difficult songs to play mainly because of all the space between each note. All that space makes it precariously easy to rush and/or flub notes. Playing slowly is a fine art unto itself. "Come Crashing" is epic in its scope and arrangement, very sprawling. I love the song but at first it seemed a little un-Failure-esque to me and frankly the execution of the drum track stumped me a little bit. Surprisingly though, Greg had written that main riff sometime between the recording of Fantastic Planet and the touring for that record; a fact that I did not know until recently. How I feel about this song would change over time and this is easily one of my favorites now, due to all of the aforementioned reasons not least of which is that it is fresh and so different sounding from new and previously recorded Failure songs. The thing I like most about this song is that the drum parts up until the outro are unlike anything I have previously played on a Failure record. I would be remiss if I didn't take this opportunity to thank Ken and Greg for introducing yet another great drum line into my arsenal. I loved "Big Trash", as it was originally called, but eventually changed to "Fair Light Era". This song kills. Great energy and in spots the most challenging song to play. These are the ones I love the most only because I have a perfectionist in me. So the more difficult a song is to play and the more I really have to focus and concentrate, the more I love playing it. Also, paradoxically, the more infuriating said song is to play. "The Focus" is just that. All of its energy is focused in an unwavering, beautiful straight line of plotting forward energy. The idea was to get from one end to the other without interrupting its flow. It's a nice, simple and unassuming pop song with a bit of heavy. "Snow Angel" is beautiful, it's full of subtleties and nuances, so delicate and full of air and with a wonderfully paced reveal. This one was another one that I got on first listen. It is very Failure and definitely could have been on, say, Fantastic Planet or its immediate follow-up.

Another fact I left out of my initial recollection of Ken and my phone conversation was talk of scheduling a session to put drums on these songs a few weeks later. Sometime in the passing weeks we would schedule said session at a little place in the Valley called Stagg Street. I remember being slightly nervous on my way to that first session. This would be the first time since we split ways that all of us would be in the same room together. It's so crazy to say out loud, even after everything that has happened over the last two years. That day would be a perfect day in every way possible. It was as if time had never passed between us. As if all of our life between then and now had not been lived. We smiled, we laughed, we enjoyed the work and each other's company better than we ever had before and like we were all together just yesterday. All at once everything was familiar and loved and most importantly, in tact. Our friendship was wonderful again and our music was back.