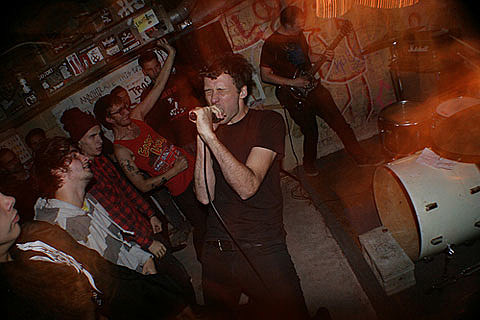 The unfuckwitable Failures will team up with Vaccine to play Brooklyn at Acheron on July 11th, alongside Raw Nerves (from Portland - thats PLURAL not singular), Surroundings, and the final show from Rats In The Walls. The show takes place the day after the pair rips Dudefest a new onewith Arab On Radar, Voetsek, Trap Them, and many others.

Failures' S/T LP dropped last year on vocalist Mark McCoy's own Youth Attack imprint and currently have LP #2 in the works. The band features members of Das Oath, Orchid, Ampere, Cut the Shit, Charles Bronson, and many other outfits including McCoy's recent undertaking as guitarist, Veins.

Veins recently dropped their first release, the sold-out cassette for Youth Attack Records. Much like Failures, the band is a supergroup of sorts featuring McCoy, Ian Jacysyzyn (Castevet) , Michael Berdan (ex-Drunkdriver), Jeroen Vrijhoef (Das Oath), and W. Boone on bass. The band currently has no dates scheduled, but Castevet does; they will play NYC on August 1st at The Studio at Webster alongside Altar of Plagues, Velnias, and Man's Gin. Tickets are on sale. Castevet's Mounds of Ash is out NOW via Profound Lore.

Full Failures/Vaccine dates, and some video is below...