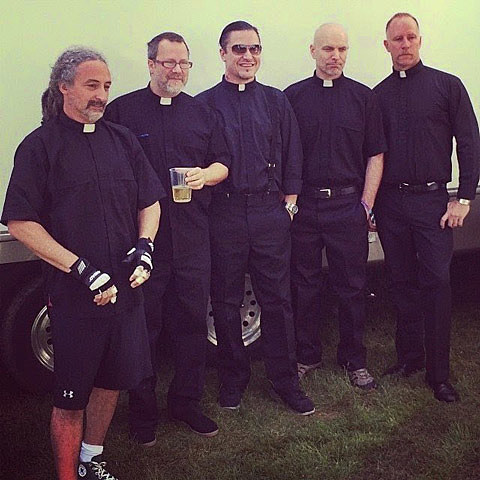 Faith No More recently hinted there was more on the way. Now, it's fact. After signing on for their first live date of 2015 at Australia's Soundwave Festival, the Mike Patton-led group announced there will be a new LP released next year, as well, reports Rolling Stone. The currently-title-less full-length, to be released on Reclamation Recordings, will be the band's first in nearly 18 years. And to give fans a taste of what's to come, the single "Motherfucker," which the band has played live, will hit shelves in a limited run for Record Store Day's Black Friday event (11/28). A digital version of the single will follow soon after than on December 9.

Along with the new tunes, the accompanying PR blast mentions worldwide tour dates to come. Well, you might as well start getting your kids ready for the possibility of that tour: Twinkle Twinkle Little Rock Star are putting out a Faith No More-themed collection of lullabies. The label have given other heavies the nighty-night treatment, including Slayer and Iron Maiden. The set will be out on September 16 through Roma Music Group. Alas, it doesn't include "Jizzlobber," but "Epic" is there, allowing you the opportunity to win Parent of the Year by flopping around like a fish out of water. Explaining that reference won't make you feel old at all.

Check out a lullabized version of "Falling to Pieces" below...