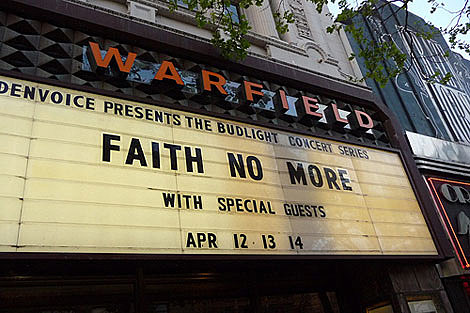 "Faith No More really kicked ass tonite at their first hometown show in many years....Neil Hamburger killed as MC and the ladies (and gents!) of Trannyshack put on a bloody good show too!" [Dina Marie]

Faith No More played their first U.S. reunion show last night (4/12). The show was also their first of three nights in a row at the Warfield Theatre in their hometown of San Francisco. A video, the poster and the setlist is below.

Mike Patton & band (that doesn't include Jim Martin) also revealed more shows, in part via a t-shirt at the show (pictured below). In addition to the previously announced (sold out) July 5th show at Williamsburg Waterfront in Brooklyn, the band will play a show at the same venue three days earlier (Friday, July 2nd), and a show at The Mann Center in Philadelphia one day after that. Tickets for the new Brooklyn show go on sale Friday (4/16) at noon.

All together that makes seven upcoming U.S. dates - the three in SF, two in NYC, one in Philly and this weekend at Coachella. The t-shirt seems to imply there won't be any other dates in 2010. Maybe they'll do a bigger tour later in the year or in 2011? The "Second Coming" dates and other stuff below... 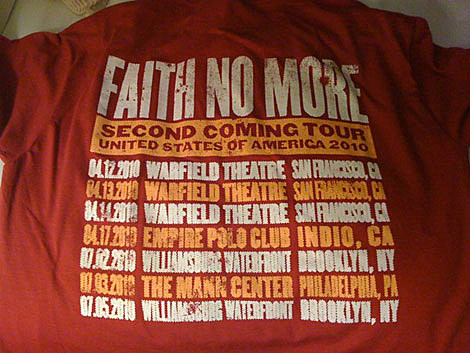 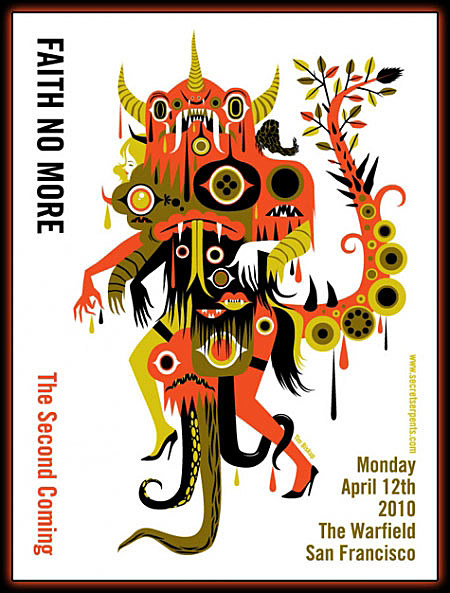