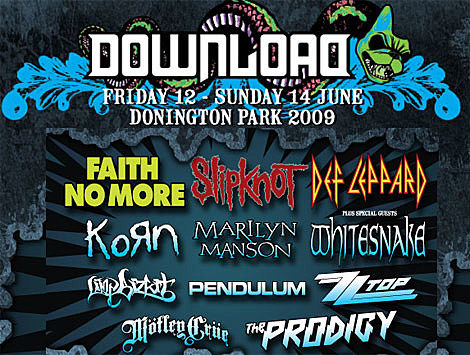 Offensive weapons or anything that may be considered offensive, even if you're planning to use it for camping ( it won't be allowed in )

This includes: ANY glass containers, Prams or pushchairs ( the festival site is not suitable for them or their occupants!) ANY pets, Laser pens ( they are dangerous and may result in eviction without refund )

Gas cylinders and petrol fuelled cookers will not be permitted in the main campsite. Anyone found in possession of a gas cylinder or petrol may be asked to leave.

The suggested cooking stoves allowed are any solid fuel type such as Disposable BBQ's, Hexi Stove with solid fuel block

Standard compact cameras will be permitted, though you will not be able to take in a professional camera e.g. One with interchangeable lenses.

Faith No More's first confirmed 2009 appearance has been announced. As you can see above, they one of three headliners at this year's Download Festival in Donington Park ("where the three counties of Nottinghamshire, Leicestershire and Derbyshire meet. - The ley-lines of ROCK!!"). Take a look at that lineup... I guess the haters win round one on this reunion (thx Zach).

P.S. "Faith No More's appearance at Download 2009 will be their ONLY UK date this year."