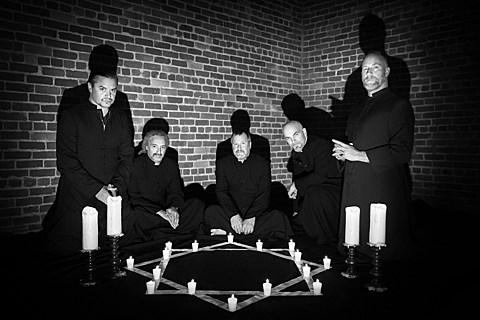 "Superhero" actually just started from the sound of the song, where it has these pounding drums and it has like this throbbing kind of pulse, and we just called it the "Superhero" song. Because, a lot of the ways we write we visualize things.

Actually this is kind of interesting because we're probably a unique band in a way. While we write music we're talking about chord changes and different things like that. What we do is we describe scenes together, and we can visualize the scene and the music kind of comes. We kind of make movie scenes for movies that don't exist. "Superhero" was one of those where it was definitely a superhero comic, I mean that was just the vibe of the song, and when Mike came to me writing words about it, we were already calling it "Superhero." So it's kind of like in the DNA; it's a comic strip. [FNM's Bill Gould to Marvel]

Faith No More said they'd be following their 2014 single "Motherfucker" (first new song in 17 years) with another single "Superhero" as a 7" on March 17 and digitally on March 31. The song hit the web today via Marvel, who also did the above-quoted interview with bassist Bill Gould. Listen below.

Both "Superhero" and "Motherfucker" are set to be on their new album, Sol Invictus, due May 15 via Reclamation/Ipecac. It's their first album since 1997's Album of the Year. They've also got upcoming tour dates, including two sold-out NYC shows.