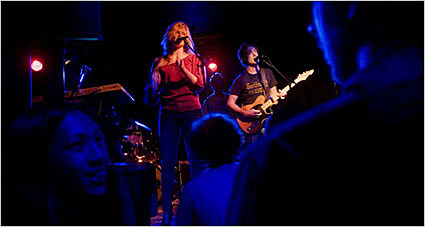 So who comes to the real performance of a fake indie band? Imaginary fans? Hired extras? True friends of the fictional band members?

On Wednesday night, City Room went down to The Annex on the Lower East Side and scoped out the performance of the All-For-Not, a spoof of an indie Williamsburg band that is the center of a new Web series backed by former Disney chief executive Michael Eisner. This was the band's first performance in New York since the series debuted last month. (They had an earlier performance at the Mercury Lounge back in December, an impressive debut venue for any band, real or fake). The conceit of the Web series, introduced in the first episode, is that a documentary crew is following the band around on tour. In other words, faux-reality television. [NY Times]